WATCH: Loretta Lynn’s “You Ain’t Woman Enough” Released On This Day 55 Years Ago 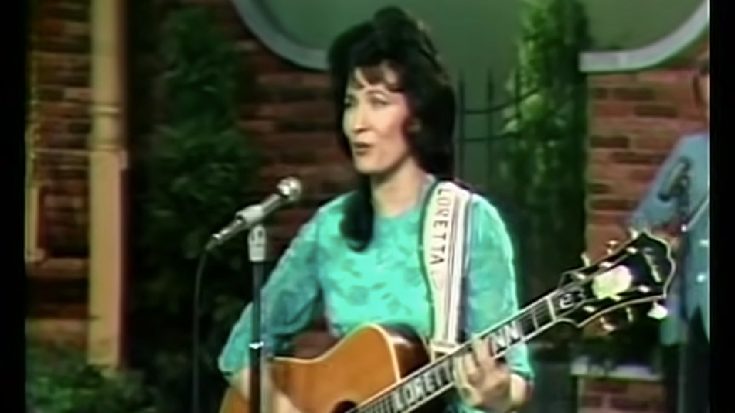 With a career spanning more than six decades, Loretta Lynn is nothing short of country music royalty. Affectionately known as The Coal Miner’s Daughter, Lynn established herself as a singer and a songwriter with her first six albums and the release of hit singles “Before I’m Over You,” “Wine, Women and Song,” and duets with Ernest Tubb like “Mr. and Mrs. Used to Be.”

But, it wasn’t until the release of the title track of “You Ain’t Woman Enough (To Take My Man)” that Lynn scored what would become one of her signature hit songs. While it barely missed out on a spot at the top of the Billboard Hot Country Singles chart, it stopped at No. 2, the album itself became her first to top the country albums chart.

Lynn was inspired to write “You Ain’t Woman Enough (To Take My Man)” after a fan snuck into her dressing room and told Loretta that the fan’s husband was cheating on her with a woman who would be attending the concert. Lynn said in the American Masters television series on PBS that she felt sorry for the woman and wrote the lyrics to the song in ten minutes and sang it on stage that night.

Lynn further detailed the story behind “You Ain’t Woman Enough (To Take My Man)” in her book, Honky Tonk Girl: My Life In Lyrics, which features the stories behind some of her greatest songs.

“I gave birth to this song, and I felt every little bit of pain in these lyrics. You know a woman likes to feel sure of a man, but there are times when things just don’t play out that way. Do I have to say more about that? I think in every marriage, at one time or the other, a woman worries about the other woman who may or may not exist. In my case, in this case, I had to be sure,” Lynn wrote. “One night, at one of my live shows, me and a girlfriend were talking. She told me her husband, who was there with her, was running around on her. She was crying because when she came through the door to get in to the show, she saw the other woman was also there. I said, ‘We will fix that old gal.’ That night I sang ‘You Ain’t Woman Enough’ and dedicated it to her. Girlfriends gotta stick together.”