“Voice” Hopeful’s Keith Whitley Cover “Started Off Kinda Shaky,” Then He Got 3 Chairs To Turn 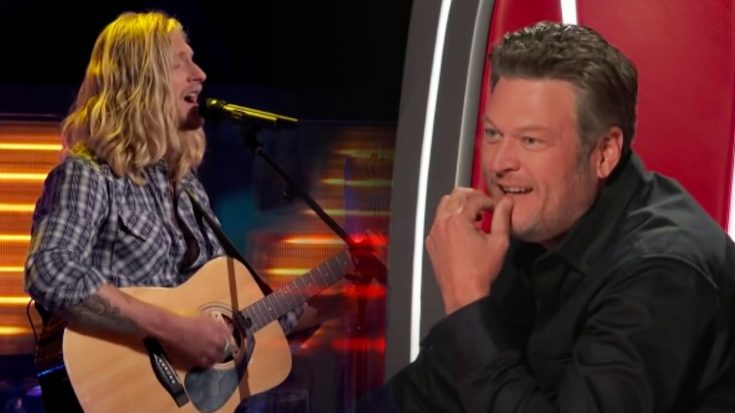 Imagine how nerve-racking it must be to audition for The Voice. Each second that ticks by without a chair turn has to feel like an eternity to the artist on stage.

34-year old Jordan Matthew Young was surely getting anxious as he progressed through his blind audition during Season 20. He was nearing the end of his performance before he finally got a chair to turn.

Young eventually got two other coaches to turn their chairs as well. By the end of the performance, Blake Shelton, Kelly Clarkson, and Nick Jonas were all facing him.

Clarkson and Jonas knew they had their work cut out for them. Young had chosen Keith Whitley‘s “I’m No Stranger to the Rain” as his audition song, which is about as country as it gets…right up Shelton’s alley.

“I’m No Stranger to the Rain” was released in 1989 off of Whitley’s album Don’t Close Your Eyes. It was the last single Whitley released before his passing later that same year.

Shelton thought there shouldn’t be any question in Young’s mind who he should pick as his coach. He claimed he was the only coach who knew “I’m No Stranger to the Rain” and knew Whitley sang it.

Because Shelton is so familiar with the song, he was hesitant to turn for Young at first. He said his performance “started off kinda shaky,” which is why he waited so long to turn his chair.

But Shelton said Young’s performance got better as he continued. He realized Young had a special voice and didn’t want to miss out on the chance to have him on his team.”You don’t sound like anybody else in country music,” Shelton complimented him.

Clarkson and Jonas did their best to convince Young not to choose Shelton as his coach. Clarkson even played a video of stitched together clips of Shelton’s fiancée (and former Voice coach) Gwen Stefani, saying Shelton is a terrible coach and Clarkson is the better choice.

But even though Clarkson and Jonas pulled out all the stops to steer Young away from Shelton, he couldn’t deny his country roots. He picked Shelton as his coach, and he was thrilled to say the least.

Check out the video below to watch Young’s audition. He is the perfect fit for Team Blake!