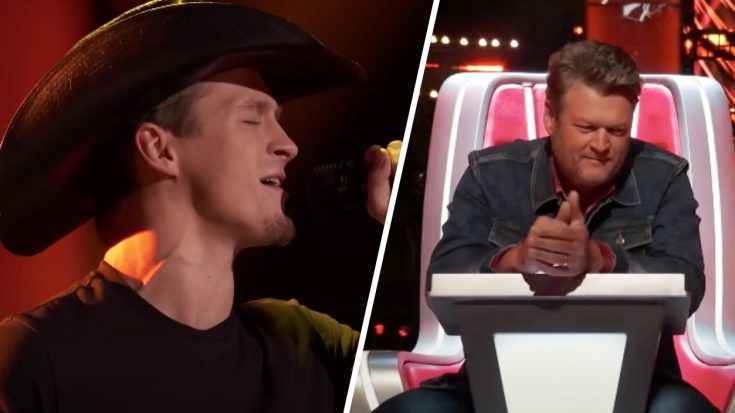 Every now and then, hopeful Voice contestants opt to sing one of the coaches’ songs during the blind auditions. It’s a bold choice that doesn’t always pay off. If they sing it in the coach’s exact style, then they need to sing it out of the park in order to impress them. Other contestants opt to give the song a unique spin, which doesn’t always dazzle the coach who recorded it.

But sometimes a contestant will sing a coach’s song so well, they know they have to have them on their team. That’s exactly what happened when Bryce Leatherwood sang “Goodbye Time” during the blind auditions for Season 22.

Conway Twitty was the first artist to record “Goodbye Time.” He released his recording in 1988 and it reached the seventh spot on the Billboard Hot Country Songs chart.

16 years later, future Voice coach Blake Shelton released a cover of the song. His version became the fourth Top Ten country hit of his career and also crossed over to claim the 73rd slot on the all-genre Billboard Hot 100.

After singing “Goodbye Time” for nearly two decades, Shelton recognized the song as soon as the intro started playing for Leatherwood’s Voice audition. He took a moment to enjoy Leatherwood’s performance before he finally turned his chair…and he was the first coach to do so! Leatherwood excitedly pointed at Shelton and smiled as he went on to belt the chorus.

Gwen Stefani and John Legend also turned their chairs for Leatherwood, much to Shelton’s dismay.

“You have excellent taste in music,” Shelton told Leatherwood after his performance. He said he didn’t feel “too ego-y” hitting his button for Leatherwood since “Goodbye Time” was Twitty’s song first.

Shelton went on to explain why he pushed his button before Leatherwood reached the chorus. He knew he already hit the two tough notes in the song’s first verse, and did so flawlessly.

Stefani and Legend tried their best to argue their respective cases. But Leatherwood was destined to join Team Blake, and he picked him as his coach.

Head below to watch Leatherwood sing “Goodbye Time.” He knocked Shelton’s socks off with his performance!