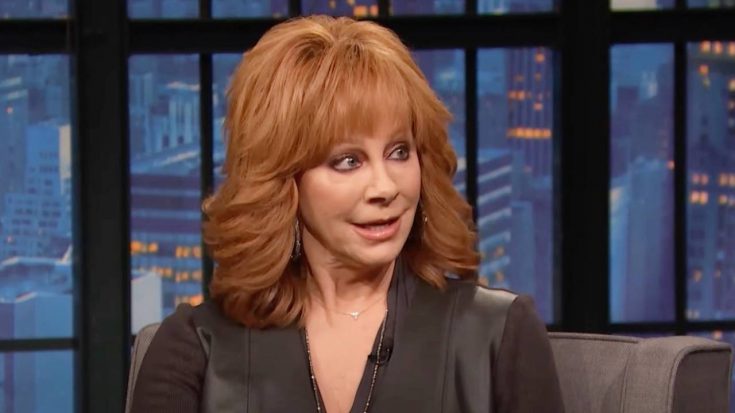 While promoting the season premiere of her show Big Sky, Reba McEntire stopped by Late Night with Seth Myers to catch up with Seth and talk all things Big Sky, her cameo in Barb And Star Go To Vista Del Mar, and much more!

During their nearly eight-minute sit-down, Seth brought up the fact that it is the 45th anniversary since the first time she sang on the Grand Ole Opry stage. Reba then told Seth that her whole family piled in the car and drove six or seven hundred miles. They’d gone to the Opry several times over the years for vacation, but obviously this visit was a little different!

Her dad drove to the back to drop her off at the Artist Entrance, but security didn’t have her on the list. They went across the street so Reba could call her agent, who assured her that she was on the bill for that night. The McEntire clan went back to the Opry Entrance and lo and behold, her name was in fact on the list!

She was slated to perform two songs, but after she was all dressed and ready to go, she was told that they were going to have to take away one of her songs. Reba asked the OPry why and they said, “Well, Dolly Parton just pulled in the parking lot and we’re gonna give her one of your songs.

At Reba’s 40th Anniversary celebration, Dolly crashed her stage – yet again – but this time to give her one song spot back!

Moments after Reba performed “Oklahoma Swing” with Vince Gill said someone special wanted to send a video message. Everyone looked up at the screen and someone said, “Hey Reba!” but the video feed cut out!

“I don’t think the video’s workin,” Gill said, before the legendary Dolly Parton cut him off and said, “I’m workin’!”

McEntire stopped dead in her tracks with her mouth wide open and turned around to see Parton walking towards her on stage. The “Fancy” singer wiped a few tears away as Parton said some very kind words to her.

“I remember 40 years ago, because when you made your debut, and actually, I was here for some reason, and you were new. You were supposed to have two spots on the Opry, and they gave me one of them. So, I just wanted to give it back to you tonight,” she joked. “I just wanted to come out and say hello, and say congratulations, and how much I love you.”

Parton and Underwood then presented McEntire with a beautiful cake and Parton led the crowd in singing “Happy Anniversary” to the tune of “Happy Birthday.” Parton changed the final lyric of the song to, “I will always love you.”