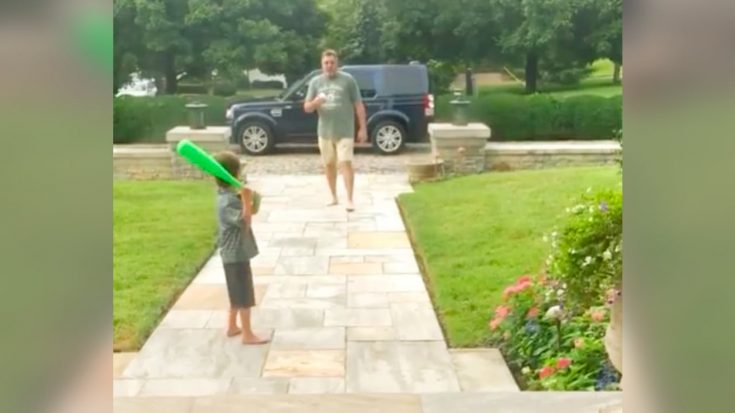 Vince Gill is a singer, songwriter, musician, father, and grandpa. The latter title is one that he earned most recently, with his first grandchild, Wyatt, being born in 2014.

Wyatt is the son of Vince’s daughter Jenny, who he shares with ex-wife Janis Oliver. Jenny, who is a singer herself, gave birth to another child in 2018, a baby girl named Everly.

Shortly after Everly was born, Jenny shared a precious video of the infant being held in Vince’s arms. In the caption, Jenny wrote that Everly’s grandpa had the honor of feeding the little one her first bottle.

First bottle by the fire in Granddad's arms. #Everly

It seems that Vince is a pretty involved grandad, because Jenny often shares photos and videos of him spending time with her children.

One newer video shows Vince out in the yard with Wyatt, who turned five in August. In the caption, Jenny wrote that her dad was helping Wyatt prepare for baseball season by pitching to him while he attempted to hit the ball.

However, poor Wyatt wasn’t having much luck, and kept missing the pitches his grandpa threw at him. As the adorable video progresses, you can see Wyatt getting more and more upset. But Vince remains patient with him, and just continues pitching in the hopes he’ll finally hit a ball.

By the end of the clip, Wyatt tries to throw the ball back to his grandpa but ends up sending it into the bushes instead, and the look on Vince’s face is priceless! You can see it by tuning in to the cute clip below.

It always warms our hearts to see country stars interact with their kids and grandkids. It’s clear that Vince loves spending time with his grandson and granddaughter!