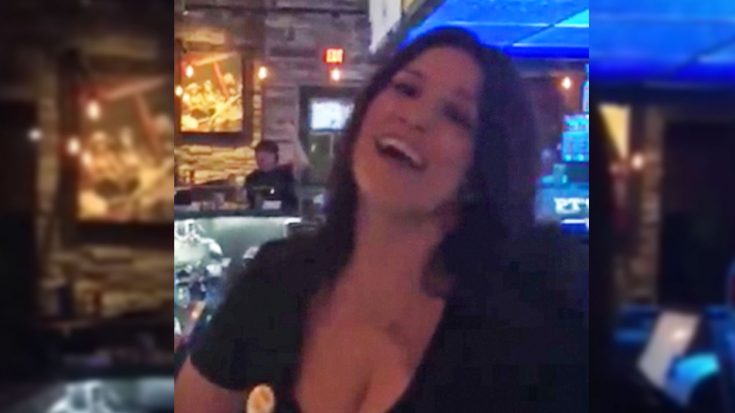 Las Vegas bartender Amanda Avila stunned her patrons with a talent they were not expecting.

As you all know, when you are hanging out at a bar, you sort of get to know the bartender serving you. It’s part of their job to interact with guests and keep the conversation going. Somehow, Patsy Cline was brought up in conversation and Amanda revealed that when she is not bartending, she is a singer – and she knew Cline’s biggest hit, “Crazy.”

The Crazy Story Behind “Crazy”

We all know “Crazy” as the hit Patsy Cline made famous but did you know it also helped make another country legend famous as well?

Before he was Willie Nelson, The Red Headed Stranger was a struggling songwriter who went by the name Hugh Nelson. He had just written a song titled “Crazy,” which had already been turned down by a male singer because it was “a girl’s song.”

Already a superstar, Cline was on the hunt for her next big hit. Nelson was at the legendary Tootsie’s Orchid Lounge in Nashville with his good friends Kris Kristofferson and Roger Miller, all of whom were unknown at the time, and Nelson ran into Cline’s husband, Charlie Dick.

Nelson gave him a demo of “Crazy” to play for Patsy, who at first hated the song. After some persuading by her producer and husband, Cline ended up recording the song and it has since become one of her signature songs, and also catapult Nelson’s career as a performer.

Turns out, the bar-goer Avila was waiting on had a special connection to that particular Patsy Cline song. Not really knowing if she could actually sing, Ash Pugh, who posted the video in May 2018, asked Avila to sing the song for her because it is her grandpa’s favorite song.

We bet Pugh is happy she did – because according to her Facebook post, Avila’s singing moved her to tears. The video might be a little dark, but one thing is very clear – Avila has an incredible voice.

Once Avila completed her impromptu performance, Pugh let out a loud cheer and round of applause, and so did we!

On this date in 1960, Patsy Cline records "I Fall To Pieces" in Nashville!

Watch Avila’s rendition of Patsy Cline’s “Crazy” in the video below.

Why is she my bartender and not singing on the big stage? Momma Jodi Pugh please show Pappy Jeff this, she sang it at my request. I’m literally tearing up at it.