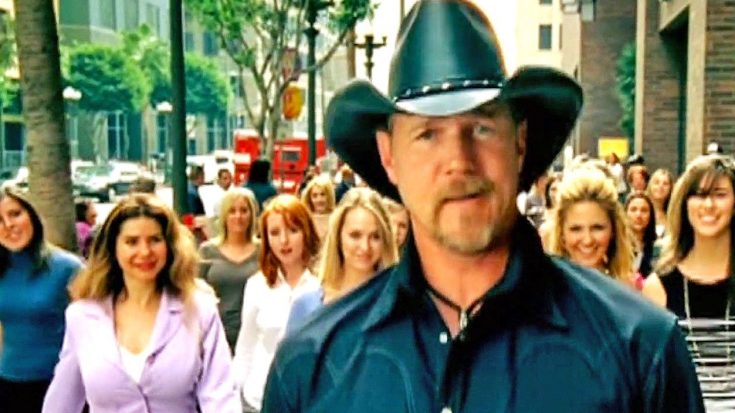 This is something that Trace Adkins covers in his number one hit from 2006, “Ladies Love Country Boys.” Written by Jamey Johnson, Rivers Rutherford and George Teren, the song was released as the second single off of Adkins’ album titled Dangerous Man.

The song opens talking about a woman who grew up in a subdivision in the city. Her parents raised her to be a sophisticated lady, and sent her to college in the South to get a law degree.

But while there, she fell in love with a country boy, and brought him home to visit, proving that no matter what background a lady comes from, she just can’t resist a country boy.

This concept is echoed throughout the song’s chorus, which Adkins belts proudly:

“They raised her up a lady but theres one thing they couldn’t avoid…ladies love country boys.”

The music video for “Ladies Love Country Boys” was directed by Michael Salomon, who has also directed many of Adkins’ other videos.

Set in a large city, Adkins sings from the top of a large building. He can also be seen strolling down the street, which is when he catches the attention of one lady after another.

Soon enough, Adkins has a whole crowd of women following him around the city. He finally manages to escape, which is when the women spot another country boy standing on the corner. Forgetting all about Adkins, they follow their new cowboy in a hot pursuit through the city.

“Ladies Love Country Boys” is a fun song, and so it only makes sense to pair it with a fun-loving video such as this.

The theme of Adkins making country girls swoon carries through some of his other videos as well. You can watch him drive a few more ladies crazy when you check out his equally appealing video for “I Got My Game On” below.