True Story: Johnny Cash Once Fought An Ostrich With A Stick 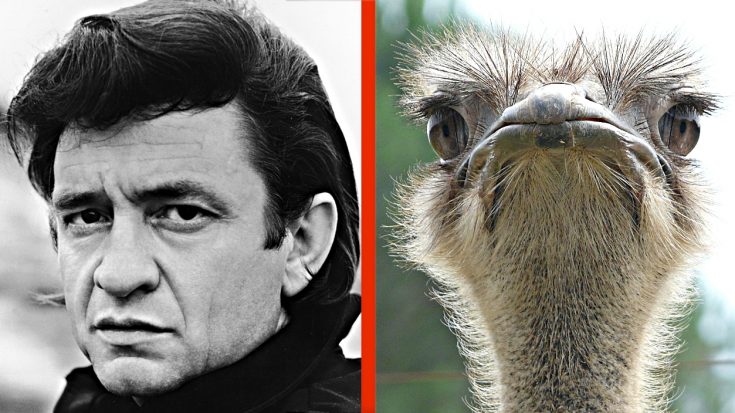 Johnny Cash once had to fight off an ostrich and luckily for him, he had a large stick and a good belt that aided him in his survival.

In 1981, Cash was well known as the “Man in Black” and well into his accomplished music career. For the most part, he spent his time at his residence equipped with studios and farms in Tennessee known as the ‘House of Cash.’

In an excerpt taken from his 2003 autobiography, Cash: The Autobiography and featured in Far Out Magazine, Cash tells the story (in great detail) of what actually happened one day when he had a brawl with his pet ostrich.

Although ostrich attacks are rare in Tennessee, Cash reveals that this indeed is a true story, and it happened on the grounds of his exotic animal park just behind the ‘House of Cash’ offices near his home on Old Hickory Lane.

Setting the scene, he explained that it had been a particularly bitter winter and the below-zero temperatures had reduced his population of ostriches by half. The female ostrich of the pair refused to be captured and taken into the barn for safety from the frigid temperatures, so she ended up freezing to death. He assumed that was why her male companion was cranky. Cash had had no issues with him before this event.

Happy birthday Johnny Cash! I did this painting in 2012, so thankful people still love it #johnnycash #johnnycashostrichattack woo dang

However, that day, the male ostrich was unhappy to see Cash as he walked through the compound like he regularly did. The ostrich jumped out in front of him, crouched, wings spread out, and hissed nastily. Nothing happened that time around, but Cash had a feeling that wouldn’t be the last he’d hear from him, and he was right. The ostrich was waiting for him on his way back to the compound and Cash decided it was important to show him who’s boss.

Cash recalled the moment saying, “The ostrich didn’t care. When I came back I was carrying a good stout six-foot stick, and I was prepared to use it. And sure enough, there he was on the trail in front of me, doing his thing. When he started moving toward me I went on the offensive, taking a good hard swipe at him.”

“I missed. He wasn’t there. He was in the air, and a split second later he was on his way down again, with that big toe of his, larger than my size-thirteen shoe, extended toward my stomach. He made contact—I’m sure there was never any question he wouldn’t—and frankly, I got off lightly. All he did was break my two lower ribs and rip my stomach open down to my belt, If the belt hadn’t been good and strong, with a solid belt buckle, he’d have spilled my guts exactly the way he meant to. As it was, he knocked me over onto my back and I broke three more ribs on a rock—but I had sense enough to keep swinging the stick, so he didn’t get to finish me. I scored a good hit on one of his legs, and he ran off.”

Coming close to death in the face of an angry ostrich is surely a wild tale. He was lucky to have survived and clearly he lived to talk about it!

Watch an interview with Johnny Cash at his ‘House of Cash’ below!