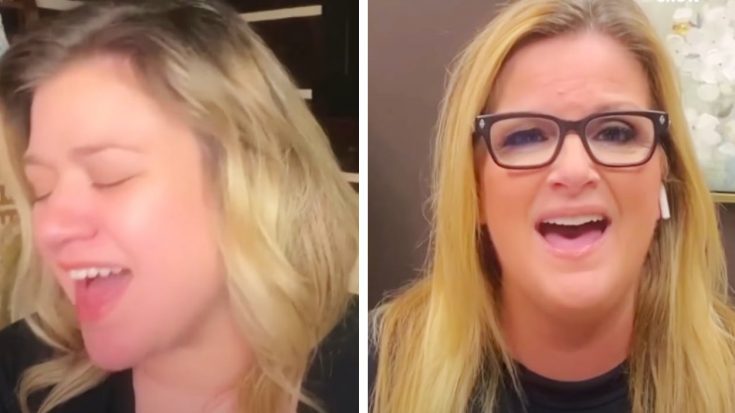 In 1996, Trisha Yearwood released a song that went on to become a cornerstone of her career. That song was “Believe Me Baby (I Lied),” which was the lead single off of her album Everybody Knows.

“Believe Me Baby (I Lied)” peaked at the number one spot on both the U.S. Hot Country Songs chart and the Canada Country Tracks chart. It was Yearwood’s fourth number one single, with her previous chart-toppers being “She’s in Love with the Boy,” “XXX’s and OOO’s (An American Girl),” and “Thinkin’ About You.”

Yearwood’s hit singles such as “Believe Me Baby (I Lied)” inspired the next generation of artists that followed in her footsteps. One such artist is Kelly Clarkson, who has made it obvious how much she admires Yearwood and her music.

The two talented vocalists have collaborated together many times in the past. They once joined Reba McEntire to record “Silent Night” and have appeared on stage for a number of live duets.

One of their best collaborations came in 2015 when Clarkson invited Yearwood to join her on stage to cover Garth Brooks‘ “Ain’t Goin’ Down (‘Til the Sun Comes Up).”

Due to everything going on in the world in 2020, Clarkson and Yearwood couldn’t share the stage. But that didn’t keep them from singing together!

Since her talk show, The Kelly Clarkson Show, temporarily ceased its normal production in early 2020, Clarkson shared virtual interviews with celebrity guests on the show’s YouTube channel. For one episode, she had Yearwood join her for a virtual duet on “Believe Me Baby (I Lied).”

Clarkson and Yearwood took turns singing individually, but also sang together. Whenever Yearwood sang on her own, Clarkson could be heard cheering her on.

At the end of the performance, Clarkson made her feelings for Yearwood crystal clear, as she said, “I love you Trisha Yearwood, you are the greatest singer on this planet! I can’t stand you. You are so good. I’m so blessed to sing with you.”

Yearwood definitely knocked her performance out of the park, and so did Clarkson! Watch them deliver their virtual duet of “Believe Me Baby (I Lied)” below.