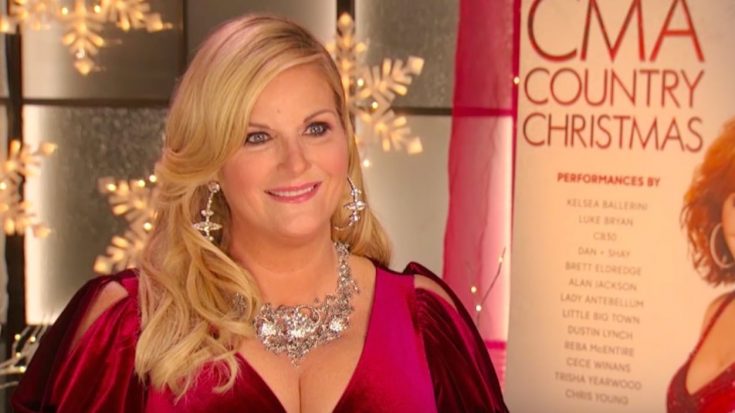 Those who tune in to watch the CMA’s annual Christmas special this year will see a new, but familiar face leading the charge as host.

For the past two years, the CMA Country Christmas special was hosted by country music legend Reba McEntire. McEntire filled the position after the departure of longtime host Jennifer Nettles, who led the program since its inception.

McEntire was the perfect person to host the special, since she had plenty of previous hosting experience. That experience carries over into modern times.

Just this year, McEntire hosted the ACM Awards solo for the second year in a row. She also served as a guest host during this year’s CMA Awards.

But despite her continued ties to the CMA, McEntire is not returning to host the 2019 Christmas special.

Instead, the CMA has announced that another iconic country singer will be taking on the role this year. And she’s no stranger to the Country Christmas program.

That someone is none other than Trisha Yearwood!

Since CMA Country Christmas taped on September 25, the CMA unveiled the special’s new host in early September. Yearwood is well-qualified for the position, since she has released multiple Christmas albums and songs.

She has also performed on CMA Country Christmas a number of times. In fact, her most recent appearance on the program was in 2017.

In addition to naming Yearwood as the new host of the holiday special, the CMA also announced the full lineup of performers. You can see that lineup in the image below.

? Ring in the holiday season with #CMAchristmas, hosted by @TrishaYearwood, with special holiday performances & unforgettable collaborations. ?? Tickets for the Sept. 25 taping in Nashville, TN go on sale THIS FRIDAY at 10 AM|CT on https://t.co/LAr9cvJAAV. pic.twitter.com/mcso8MNxBV

Based on Yearwood’s past holiday performances, we expect she’ll be a fantastic host of the special. You can watch her sing “Silent Night” with Kelly Clarkson and McEntire below.

Are you sad to see McEntire leave her post as the Country Christmas host? Maybe she’ll make a surprise appearance as a special guest. After all, she and Yearwood are good friends!