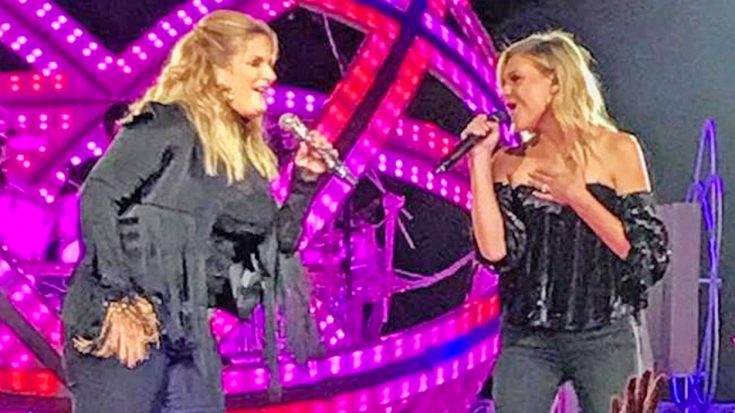 For the three straight years, country star Trisha Yearwood shared the stage with her husband, Garth Brooks, on their world tour. Towards the end of the tour, they scheduled seven shows in Nashville, Tennessee. Being the home of many country music singers, it shouldn’t come as a surprise that a few stopped by the show. Even though it shouldn’t be a surprise, it still is when it happens!

Country singer Kelsea Ballerini spilled the beans that she had something big planned one night, but didn’t dish anything else.

surprise happening tonight that I am shaking in my boots about already. I love nashville.

The surprise, as it turns out, was that she was going to duet with Yearwood at the show that night!

This all likely happened because Ballerini and her new husband, Australian country singer Morgan Evans, attended the Dec. 10 concert. They were shown on the kiss cam during Yearwood’s performance of “She’s In Love With The Boy.”

When you look up during @trishayearwood's "She's In Love With The Boy" and see @KelseaBallerini & @Morgan_Evans on the kiss cam 😍💓 pic.twitter.com/Wr7rn9hD9g

Ballerini later tweeted, “I wanna be Trisha Yearwood when I grow up,” and Yearwood responded, inviting her to sing with her anytime!

Come sing with me anytime, @KelseaBallerini! Love you! https://t.co/sexuW9uwIO

We guess Ballerini took her up on that offer because they performed that exact song together a few nights later. Their performance made fans go absolutely crazy, and the crowd’s energy rubbed off on the singers, who were jumping around on stage from excitement.

If you look closely, at the very end, you can see Garth Brooks playing guitar for them and leading the band during the outro. Watch their epic duet below.