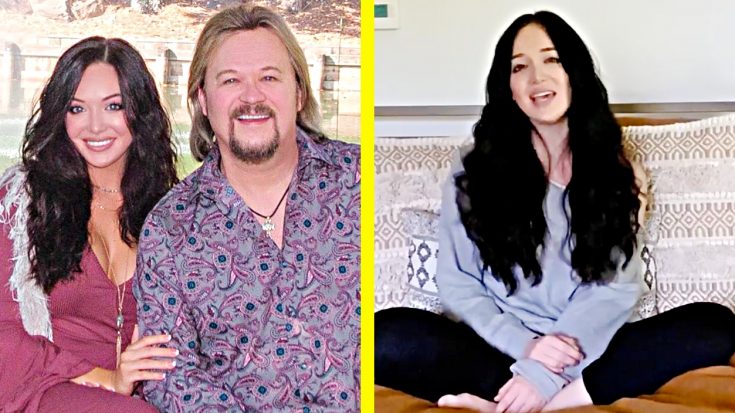 Travis Tritt’s daughter, Tyler Reese, showcased her natural talent when she posted a video to Instagram of her serenading us with the Bonnie Raitt classic “I Can’t Make You Love Me.”

Tyler is no stranger to the stage and performing, as the world was first introduced to Travis Tritt’s only daughter, following the release of their brilliant duet to the tune of Patty Smyth and Don Henley’s “Sometimes Love Just Ain’t Enough” back in 2013.

With the video for the father-daughter duet racking up over 14 million views, fans speculated whether Tyler would pursue a music career of her own. In 2017, she released her first single “Perfect,” which was a true testament to all the hard work she was putting in to pursue her dream.

At a show in 2017, Tyler delivered a pure country rendition of Maren Morris’ groundbreaking mega-hit “My Church.” Adding her own flair to the song, Tyler elegantly nailed every hard note with ease, proving what true natural talent she has.

In the video posted to Instagram, Tyler shared a stripped-down version of her performing Bonnie Raitt’s 1991 hit “I Can’t Make You Love Me.”

The song was featured on Raitt’s eleventh studio album Luck of the Draw and was released as the third single in 1991. “I Can’t Make You Love Me,” went on to be one of Raitt’s most successful singles, making it to the top twenty on Billboard Hot 100 chart and the top ten on the Adult Contemporary chart.

Sitting with her legs crossed on a bed, Tyler plays the backing track of the song as she starts the first verse with her smooth, alluring voice, “Turn down the lights, turn down the bed, turn down these voices inside my head,” she sings. Tyler gave an incredible performance of the song and left fans wanting more.

Watch her mesmerizing rendition of “I Can’t Make You Love Me” below.