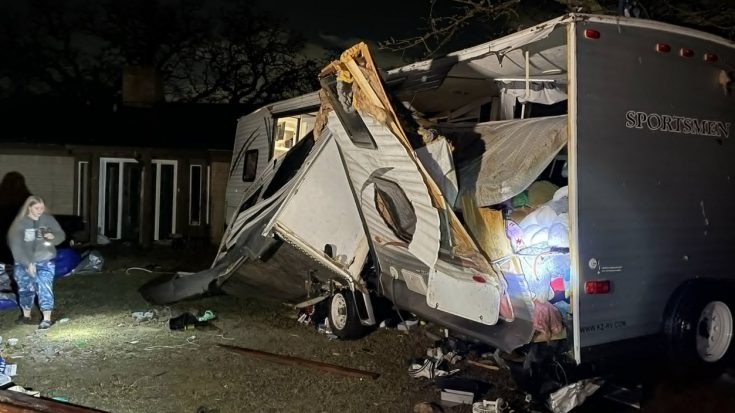 The National Weather Service said that Johnson County man, Shaun Zeleny, and his stepdaughter are blessed to be alive after a tornado flipped their RV over multiple times in their backyard.

The 43-year-old spoke from a stretcher with WFAA saying “I’m alright, man,” right before being taken to John Peter Smith Hospital in Fort Worth.

According to the gather, his 17-year-old stepdaughter, Brittaney Deaton, was inside the Rv trailer in the backyard when the strong winds started to pick up and cause havoc.

“I was going to stay in the trailer for the night; it’s pretty much my home,” Brittaney said. “I was sleeping, and I woke up scared because it started rocking really bad.”

JUST IN: we’re east of Joshua near Egan where tornado debris showed up on radar earlier tonight.

At this home we found an extraordinary story.

Brittaney tried to get out of the trailer but wasn’t able to due to stairs being in the way of the doorway.

Brittaney said “He threw them out of the way, and I jumped down. But by the time we were trying to get to the house, the trailer had rolled over both him and me.”

Brittaney’s mom watched from her home as the RV flipped, “I’m standing at the front door watching everything, and I’m like ‘oh my god,'” Zeleny said.

Listen to his daughter recount what happened: pic.twitter.com/NWaGxvsl2r

After everything was over, Shaun was found in the mud on his side with his nose, leg, and ribs broken, according to the medics. Neighbors, fortunately, found him and rushed to get him to the hospital.

“He was hurting so bad, and we were trying to get him help,” Zeleny said.

Fortunately, Brittaney’s mom’s house was left standing but most importantly, she said she’s happy both her husband and her daughter made it through the tornado’s wrath.