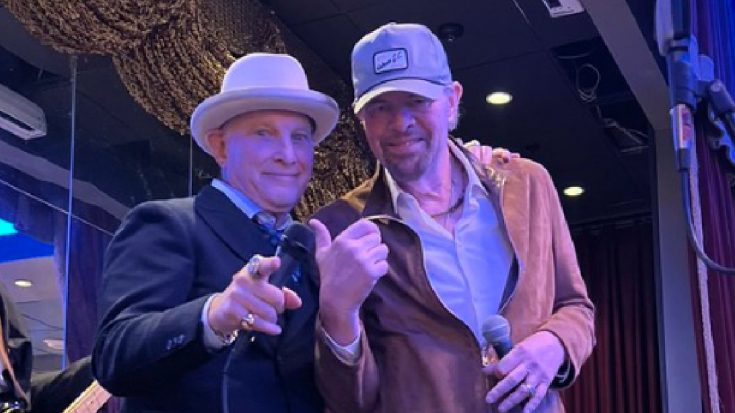 Toby Keith made a surprise appearance at Jeff Ruby’s Steakhouse in Lexington, Kentucky, on Friday (November 4), and reportedly sang to patrons for nearly an hour.

The performance marks the first time Keith has done so publicly since he was diagnosed with stomach cancer in the fall of 2021. In June, Toby shared his diagnosis with fans and said that he had spent the previous six months undergoing chemotherapy, radiation and surgery.

“So far, so good. I need time to breathe, recover and relax,” Keith wrote. “I am looking forward to spending this time with my family. But I will see the fans sooner than later.”

Shortly after posting the new to social media, all of Toby’s scheduled concerts were canceled.

In mid-September Toby canceled a scheduled appearance at the Sabes Wings “Strike Out” benefit weekend in Paso Robles, New Mexico. SabesWings spokesperson Matt Heien, reported at the time, “He is still going through recovery and it is a tough week.”

Toby Keith’s appearance at Jeff Ruby’s on Friday was a welcome surprise to patrons who were treated to a mini concert from the country star.

Keith was in Lexington for the 2022 Breeder’s Cup race and stopped by the steakhouse where he shared the stage with Ruby.

ALL of the best people are in town for #breederscup2022 ! Excited to have @tobykeith on stage with Mr. Ruby Friday night at @JeffRuby in Lexington 🎶🎤 #BC2022 @kincaidndallas pic.twitter.com/82NqGYZJ31

Those in attendance reported that Toby sang for more than an hour, and a video posted online shows the 61-year-old singing his 2003 hit, “I Love This Bar.”

See Toby see in the video below.

He loves this bar 🎶🎸 pic.twitter.com/S9cDPFFnOy