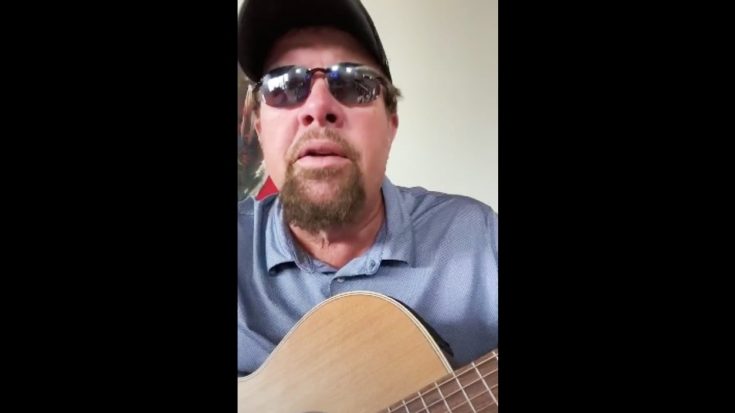 Trying times got a little harder when Kenny Rogers passed away on March 20, 2020 at the age of 81. Tributes came pouring in from his fellow artists, including many musical performances.

CMT even hosted a special in Rogers’ honor. Artists such as Vince Gill, Rascal Flatts, and Lady A all contributed by singing covers of his famous songs.

There was also a touching performance from Rogers’ longtime friend and duet partner, Dolly Parton. She sang “Sweet Music Man” in his honor.

People are continuing to share Rogers’ songs. Artists such as Toby Keith have kept the legacy of “The Gambler” alive by covering his tunes and sharing their performances with the world.

Keith was stuck down in Mexico and left his guitar at home, so he went to a furniture store and bought an old guitar there. After bringing home his new-to-him guitar, Keith started sharing cover performances of old country tunes and songs he admires.

During his “Furniture Store Guitar Sessions,” Keith has covered everyone from Merle Haggard to Jamie O’Neal. He even did an acoustic rendition of his own song, “As Good As I Once Was.”

One of the standout performances in Keith’s “Furniture Store Guitar Sessions” is his tribute to Rogers. After hearing one of his songs the previous day, Keith decided to honor “The Gambler” by singing it himself.

The song Keith covered was “Daytime Friends,” which Rogers released in 1977. It went on to top the Hot Country Songs chart, making it the second-ever #1 single of Rogers’ solo career.

Before Keith covered “Daytime Friends,” he briefly introduced the song by speaking about Rogers.

“We lost Kenny Rogers a little while back…” Keith said, going in to tell the story of how he heard “Daytime Friends” the day prior to filming his video and decided to share a cover of it.

Keith was able to interact with Rogers a few times, and reflected on those memories. “[I] Got to work with him a few times, he was always nice to me,” he said.

We’re sure Rogers would be proud to hear Keith’s rendition of his song. He did a stand-up job.