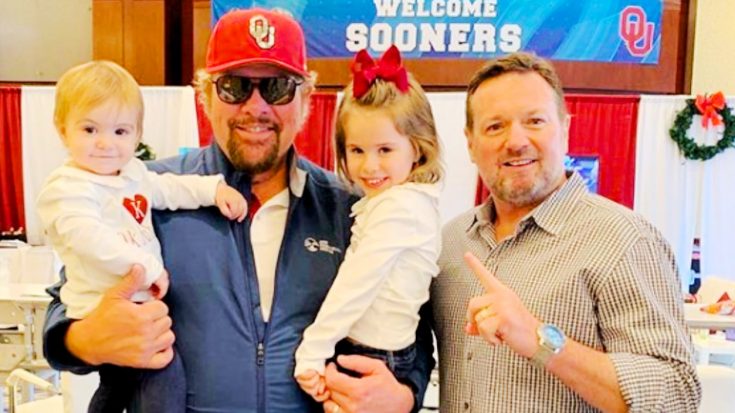 2019 will forever be known as the year of the “baby boom” in country music. Dozens of artists welcomed little ones into their families during the last year of the decade.

One of the first artists to give birth in 2019 was Krystal Keith, the 34-year-old daughter of Toby Keith and his wife, Tricia.

Krystal made her country music debut at the 2004 CMA Awards when she sang “Mockingbird” with her father. She later went on to release the Country Airplay chart hit, “Daddy Dance with Me,” which she performed at her 2010 wedding to Andrew Sandubrae.

The couple welcomed their first daughter, Hensley Jack, in October 2015. Her birth made Toby a grandpa for the third time, since his eldest daughter, Shelley, already had two children by then.

Then, in the summer of 2018, Krystal got Hensley to help her announce the upcoming arrival of the newest Sandubrae family member. The sweet video shows an excited Hensley declaring that her mama had a “baby in her belly.”

Hensley’s younger sibling was born on January 29, 2019. Krystal gave birth to another baby girl, and she and Andrew named her Kirby Kaye.

“Hensley Jack is the best big sister and Drew is way out numbered with a house full of girls and wouldn’t change a thing,” Krystal wrote alongside a photo that shows her kissing baby Kirby.

When you thought you had loved as big as you ever could. And then in a single moment, the size of that love doubles. Welcome to the world Kirby Kaye Sandubrae. Our sweet girl joined us on Tuesday weighing 7lbs and 14oz. We are happy and healthy. Hensley Jack is the best big sister and Drew is way out numbered with a house full of girls and wouldn’t change a thing.

A little over a month after Kirby’s birth, Krystal shared her first public photo of her with her “PopPop” Toby. The precious picture shows Kirby all snuggled up to Toby while she rested on his chest.

“Snuggled into the same spot I snuggled into 33 years ago,” Krystal captioned the adorable snapshot.

Now, you can witness how much Kirby has grown by seeing her newest picture with PopPop Toby!

The Keith-Sandubrae bunch all turned out on Saturday (December 28) to root for the Oklahoma Sooners at the Peach Bowl in Atlanta, Georgia. Hensley and Kirby were dressed up in their finest Sooners attire and matching red accessories.

While at the game, Krystal snapped a picture of Toby and the girls. Toby can be seen holding his two granddaughters while smiling at the camera…and both Hensley and Kirby were smiling too!

It’s hard to believe that Kirby is already one by now. She has gotten so big!

Of course, it’s also hard to believe that Krystal is now 34 and a mama of two. It seems like it was only yesterday when she was singing “Mockingbird” with Toby at the 2004 CMA Awards.

You can look back on that unforgettable father-daughter duet by tuning in to the video below.

We love seeing photos of Toby with his grandkids, and hope Krystal will share more in the future!