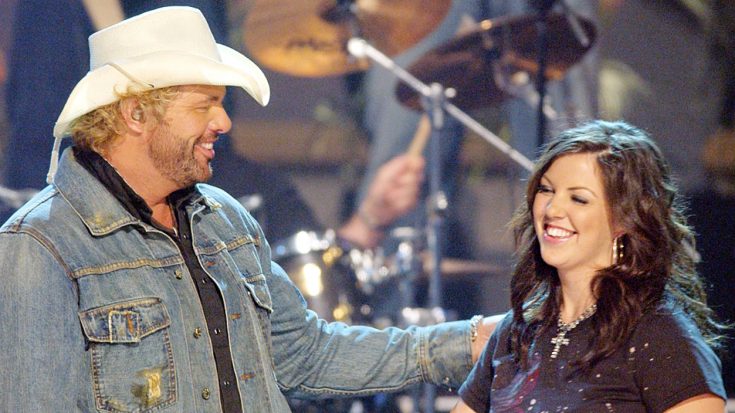 While much is known about Toby Keith‘s country music career, only his most devoted fans know every little detail about his personal life. For those of you who didn’t know who Toby spends his time with off the stage, allow us to fill you in.

Toby and his wife, Tricia, have been married since March 1984. Tricia already had a daughter, Shelley, when she married Toby, and he adopted her in 1984. The couple went on to have two children together, a daughter named Krystal and a son named Stelen.

As the oldest of Toby and Tricia’s brood, Shelley already has two kids of her own, a boy and a girl. Krystal made Toby a grandpa yet again in October 2015 when she and her husband Andrew welcomed a baby girl they named Hensley.

Throwback Thursday to the most magical Monday of our lives! Meet our sweet baby girl Hensley Jack Sandubrae. 6lbs 11oz of pure and precious! God is so good!

During an interview with popculture.country in February 2018, Krystal spoke about what Toby is like as a grandfather to her little girl. As she explained, they don’t live far from each other, so Toby gets to see Hensley every day when he’s in town.

“…We’re a mile from the golf course, which my parents basically live at when they’re in town,” Krystal said. “He takes her out in the golf cart and shows her off to all his buddies and then mom takes her to her girlfriends. She’s spoiled rotten.”

Now, Toby will soon have another grandchild to spoil…because Krystal is pregnant again!

Krystal put together the most adorable announcement ever, having Hensley be the one to share the exciting news. Wearing a shirt reading “Big Sister” on the front, Hensley clutched a baby doll while she proudly proclaimed, “Mommy has a baby in her belly!”

Who knows, maybe someday Toby will bring Hensley and her sibling up on stage to sing with him. Years ago, he introduced a teenage Krystal to the world when he welcomed her to the stage to perform their duet “Mockingbird.”

While the duet has a rock and roll vibe, it was still touching to watch. After all of these years, country fans still talk about it, proving that it was an unforgettable moment for more people than just Toby and Krystal. You can relive that famous duet by tuning in to the clip below.

A huge congratulations to Krystal and her entire family on their upcoming addition!