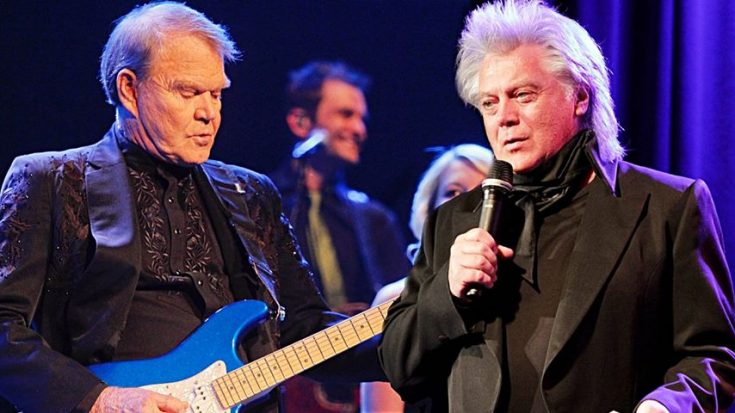 If a picture’s worth a thousand words, this last photograph of legendary musician Glen Campbell surely tells the story of a lifetime, his lifetime.

There’s the story behind the picture on the cover of the July 29, 2018 Parade Magazine. It’s one that reflects the true love and unwavering devotion shared between Glen and his wife, Kim. The couple would’ve been married 35 years at the time of the singer’s untimely death.

A Tale Worth Telling

Still, there’s another tale worth telling; it’s the story behind the last photograph taken of Glen and Kim Campbell and moreover, who took that photo.

It was with that task in mind that the multi-talented musician had an opportunity to pay a visit to the ailing Campbell on the eve of his 81st birthday.

Campbell’s wife, Kim, and the family asked Stuart to visit Glen and photograph him and his family during their visit at his place of residence, the Nashville Alzheimer’s and Memory Care Center of Excellence.

No Stranger To Dementia

Stuart was no stranger to memory care facilities or even the heartbreak of losing a loved one to dementia or Alzheimer’s; he understood the situation well.

The day Stuart took the family photos capturing Glen’s birthday visit with his family members was almost two years to the day of his dad’s death from complications associated with dementia.

On stage #GlenCampbell was a legendary country musician, but behind the curtain he was battling #Alzheimers. His widow #KimCampbell shares her story of #caregiving during his battle with the disease in this week's cover story https://t.co/CZ41n3Msci #ENDALZ pic.twitter.com/WX6nUMUYf6

Because of his past experience and upon meeting with Glen, the musician-photographer said he understood “what a special time that was.” He understood the importance of getting it right. Perhaps subconsciously, Stuart knew this might be the last photo opportunity the family might have.

As one might expect, the family attempted to cheer up Glen and help him celebrate his birthday. Stuart says the highlight of the day occurred when Glen began to lose interest in his guests. Marty had to think fast.

That’s when magic struck, Marty recalled. He stuck a guitar in Glen’s hands. Campbell actually began tuning the guitar and even strummed a few notes. That hadn’t happened in years! Though it was short-lived, the flame did flicker for a few minutes. That was it.

On August 8, 2017, less than four months after Stuart photographed him, Glen Travis Campbell lost his battle with Alzheimer’s. Indeed, Marty Stuart had taken the last living photos of Glen Campbell and his family. To see more of Stuart’s photos he captured during Glen Campbell’s final days, check out Parade Magazine.

It is with the heaviest of hearts that we announce the passing of our beloved husband, father, grandfather, and legendary singer and guitarist, Glen Travis Campbell, at the age of 81, following his long and courageous battle with Alzheimer's disease. Glen is survived by his wife, Kim Campbell of Nashville, TN; their three children, Cal, Shannon and Ashley; his children from previous marriages, Debby, Kelli, Travis, Kane, and Dillon; ten grandchildren, great- and great-great-grandchildren; sisters Barbara, Sandra, and Jane; and brothers John Wallace “Shorty” and Gerald. In lieu of flowers, donations for Alzheimer’s research may be made to the Glen Campbell Memorial Fund at BrightFocus Foundation through the donation page at Careliving.org. A personal statement from Kim Campbell will follow. The family appreciates your prayers and respect for their privacy at this time.

Just as the photos, the song you’re about to hear has meaning, too. Glen Campbell recorded “I’m Not Gonna Miss You” as the soundtrack to the documentary Glen Campbell: I’ll Be Me, which focuses on the singer’s diagnosis of Alzheimer’s disease and his final tour. Let us know what you think…