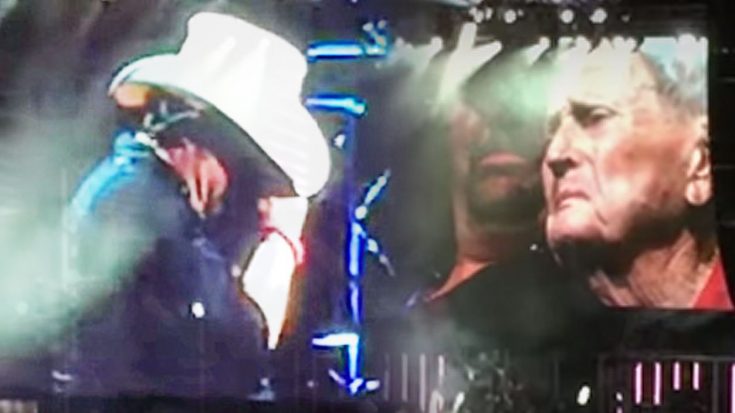 As Patriotic As They Come

Keith is known for bringing veterans on stage during performances, but none have touched him quite like this one. He was overcome with emotion when he welcomed an American Hero on stage.

“I have a very special guest here with me tonight,” Keith told the crowd. “Lt. Col. Harry Frizzell Sr., 93 years old. People! Listen! 34 years of service. Vietnam, Korea, WWII, and he put 4 kids through our school back home. I wanted y’all to see what a true American hero looks like.”

A Dedication That Meant So Much

Keith and Frizzell held hands and you could see the emotion come over both of the men.

Keith sang two of his popular hits, “American Soldier” and “Courtesy of the Red, White, and Blue.” Following the performance, Frizzell tearfully saluted the crowd.

After Keith played “Courtesy of the Red, White, and Blue,” he then handed Frizzell the microphone, who said, “My name is Lt. Col. Harry Frizzell. I’m from Oklahoma just like this gentleman…I would like to say just a few sentences here,” Frizzell told an applauding audience. “God bless America.”

It was right then that emotion completely overcame Keith. He can be seen in the video bending over, so overcome with emotion that when he stands upright again, he uses his fingers to dab tears from his eyes. Can’t blame him!

Watch this emotional performance and tribute to a hero. God bless our troops!