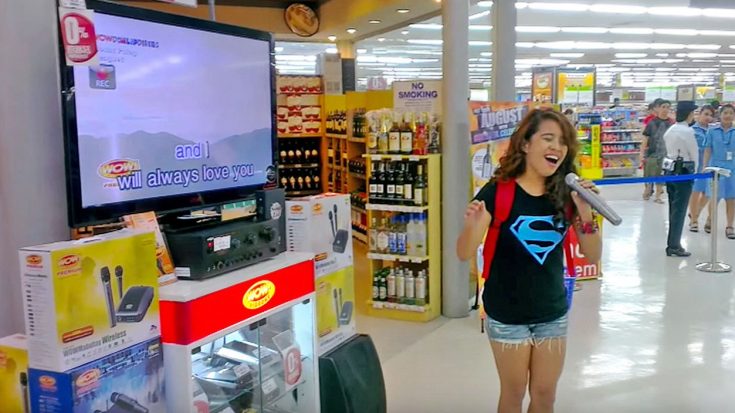 A young woman named Zendee Rose Tenerefe gained significant fame by becoming known as the random girl who graced a packed mall in southeast Asia with her insane vocal gift.

Perfectly belting out Dolly Parton’s iconic song “I Will Always Love You,” Zendee took the Whitney Houston approach to this timeless ballad.

Equipped with nothing more than a microphone and a karaoke machine, the talented young girl absolutely floored oncoming shoppers and mall workers.

As the clip went viral, the Filipino singing sensation appeared on the television shows X Factor and The Ellen Show, as well as skyrocketed her fanbase!

Parton wrote “I Will Always Love You” for former singing partner Porter Wagoner in 1974. The song was also famously covered by R&B singer Whitney Houston, who added her own iconic spin on the tune.

Zendee is clearly a powerhouse vocalist, and we think both Houston and Parton would be impressed by the young singer’s impromptu performance.

Check it out below!