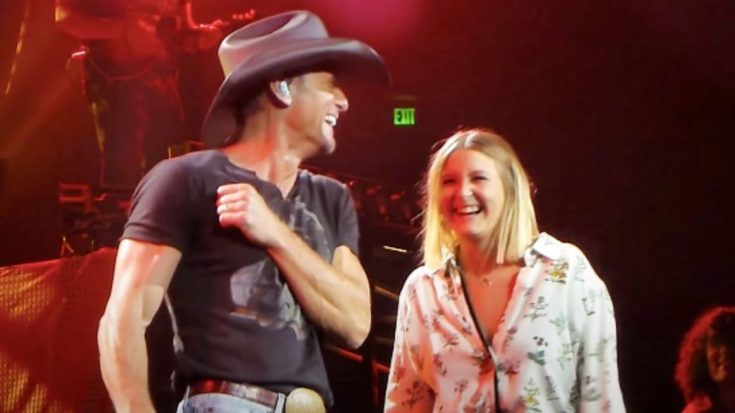 Tim McGraw and Faith Hill share three daughters: Gracie, Maggie, and Audrey. Tim and Faith used to be fiercely protective of their girls’ privacy, and rarely shared photos of them online.

But all of their daughters are now adults, and Gracie and Audrey even have public Instagram accounts.

All three girls inherited their parents’ musical talents. We’ve seen all of them perform live, and Gracie even recorded a duet with Tim.

Gracie is now living in New York, where she’s chasing her dreams. Her Instagram followers get an inside look into her life…and get to enjoy her impeccable sense of humor in the process.

Recently, Gracie came across one of her dad’s old photos. The photo was actually the cover art for his 1994 album, Not a Moment Too Soon. It is considered to be McGraw’s breakthrough album, and contains songs such as “Don’t Take the Girl” and “Down on the Farm.”

Gracie hadn’t even been born when her dad released Not a Moment Too Soon.

1995 Tim McGraw was at #1 on the US Country chart with "Not A Moment Too Soon," pic.twitter.com/1dCOpd2RPy

It appears Gracie recently did a photoshoot of her own. One of the pictures she took reminded her of the Not a Moment Too Soon cover art. She held the exact pose Tim was holding in the photo.

Gracie made her recreation all the more hilarious by drawing a mustache over her face to resemble the facial hair her father was sporting back in 1994.

The recreation also caught the attention of Tim’s 1883 co-stars James Landry Hebert and Eric Nelsen (who played Wade and Ennis). Their comments made it clear they were amused.

Head below to see Gracie’s hysterical recreation of the Not a Moment Too Soon cover art. She nailed it!