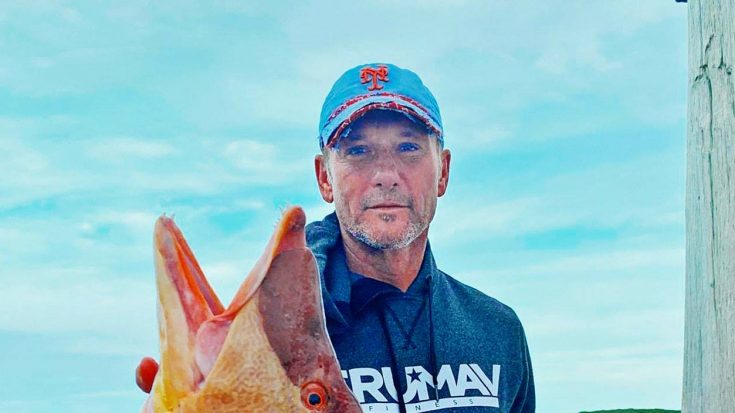 When he’s not making sold-out audiences swoon, country’s favorite heartthrob, Tim McGraw is getting his hands on some big catches. The loving father and husband took a little trip to his private Bahamian Island for a fishing trip and caught his biggest guy yet.

You’re probably wondering…”private island?!” but it’s true! McGraw and wife Faith Hill bought their getaway escape permanently back in 2003. The Nashville couple set their sites on the area and knew right away this was where they wanted to build their Bahamas home. While the settling-in process wasn’t as easy as they hoped – it was worth it in the end. It has since unfolded into their perfect vision of simplicity and relaxation, with breathtaking views and natural light glistening in from every direction, their dream home has come to life.

Now, the sweet couple and their three daughters have the ultimate getaway spot all to themselves.

While the ladies love to relax, McGraw spends his days in the water. McGraw has picked up a hobby of spearfishing where he gets up close and personal with life down under. The singer has been known to scuba dive under the water to find his fish of choice with just a polespear in hand. One of his favorite discoveries was found 23 ft under and weighing in at 15lb.

But it was McGraw’s latest catch that has him really showing off! The singer took to Instagram to share his personal best thus far…a big ole hogfish. This time around though McGraw did a free dive reaching 35 ft under! Freediving is a type of underwater diving in which the diver relies on holding their breath until they resurface instead of depending on a breathing apparatus.

Congrats to Tim on his big catch!

If you’re wanting more views of their getaway paradise, you can check out the video below.