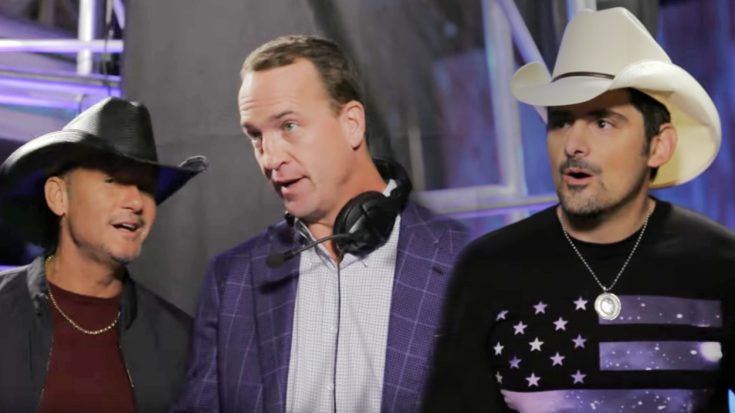 Last year, fans were shocked to hear that Brad Paisley wasn’t going to returns as co-host of the CMA Awards along with Carrie Underwood. This year’s show would have been their 12th year hosting together.

There were two reasons why they eventually calmed down after the news broke, one being that Underwood’s guest hosts would be Reba McEntire and Dolly Parton.

Another reason was that it was announced shortly after that Paisley would be getting his own TV special called Brad Paisley Thinks He’s Special.

Of the title, Paisley said, “One of the reasons we named it Brad Paisley Thinks He’s Special is because I felt like it would be a lot of fun to tear me down throughout this and that’s kinda the vehicle. I’m roasted the whole time. This doesn’t serve to elevate me in any way, really [laughing]. From the minute the show starts, Peyton Manning is telling me how I really should not even be doing this. And it gets worse after that.”

And if you tuned in on Tuesday (Dec. 3, 2019), you’d know that Manning, Paisley’s frequent co-star in Nationwide commercials, really is trying to replace him in his own TV special!

During a skit with the Jonas Brothers, Paisley has each of the brother’s audition for their roles as themselves and Manning comes in to audition for the part of Brad Paisley!

At one point, Manning even brought in Tim McGraw to replace Paisley – in the middle of the show!

As Paisley walked off stage, he told Manning, “I think it’s getting better,” but the former NFL quarterback said, “We’re gonna have to make a change.”

Ever the athlete, Manning explains that he wants to win, so he is going to bring up a “back up.” He brought out Tim McGraw.

Paisley was perplexed, so Manning explained, “Tim McGraw knows he’s special,” as opposed to just thinking he is, as the title says.

Their banter the next few seconds was absolutely hilarious! Make sure you watch the clip below.