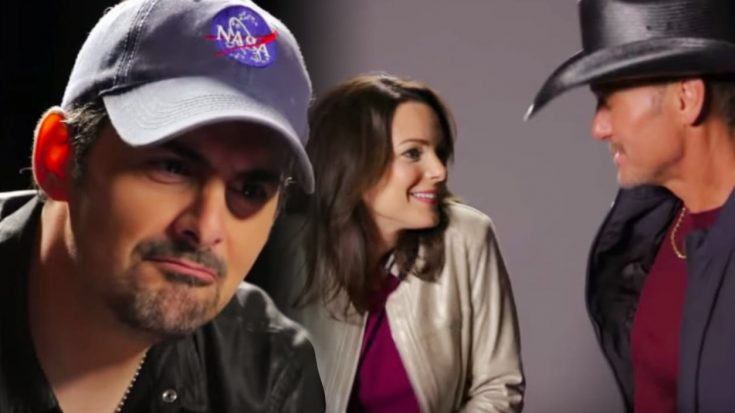 There was also an entire bit about the Jonas Brothers, and Kevin, Joe, and Nick Jonas all showed up to participate.

The bit has Brad auditioning various celebrities for the role of Nick Jonas, including Nick himself! But Brad seemed most impressed with Darius’ audition, in which he wore a wig resembling Nick’s hair and simply said “What’s up girl?”

Y'all! Do not miss @BradPaisley's hilarious tv special tonight. I mean… I nailed that @NickJonas impression. 8/7c on @ABCnetwork! #BradPaisleySpecial

Later on, Brad’s wife, Kimberly Williams-Paisley, stepped into the audition room. She was shocked to discover Brad wanted her to audition to play his mother in the special.

“This is stupid, I’m not playing your mother,” she said.

But Kimberly changed her tune when Tim McGraw walked into the room, and revealed he would be auditioning to play Brad’s father.

The two started to get a little flirty, so Brad quickly asked Tim to go ahead and read his line. Tim was happy to do so, saying that the script indicated he and Kimberly should be “making out” in the kitchen when the kids come home and catch them.

Despite Brad’s protest that the script didn’t say anything like that, Kimberly got into the idea. “Maybe we should do it on the couch?” she asked.

After that, Brad asked to see Tim’s script. “This is your handwriting!” he exclaimed.

But Tim argued that it wasn’t his handwriting…it was Kimberly’s!

“What, that doesn’t make any sense!” she said, playing dumb.

Brad had enough at that point, and turned to the camera, saying, “Cut, cut!”

You can see all of the hilarity unfold in the video of the “Jonas Brothers Audition” bit from Brad’s TV special, which we’ve included below.

Clearly Brad isn’t the only comedian in his family, because Kimberly had us cracking up in this segment!