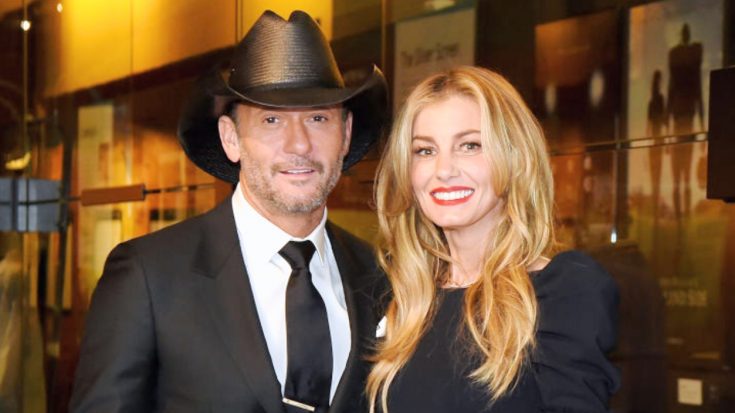 Even though Tim McGraw and Faith Hill are known worldwide as a country music power couple, only a few people have ever seen photos of their three daughters, Gracie, Maggie, and Audrey.

Ever since Gracie was born over 21 years ago, the couple has aimed to give their girls a normal childhood. Part of that normal childhood involved keeping them out of the spotlight, which they managed to do quite well.

As the girls have grown, Tim and Faith have been more willing to share photos and videos of them with the world. The only daughter who we don’t know much about is the youngest, Audrey, since she still lives at home with her parents.

But Gracie and Maggie are both in college now, and Tim and Faith have been alright with sharing the occasional photo or video of them since they’ve moved out. They still only do so on rare occasions, such as the girls’ birthdays.

For example, Tim shared this rare photo of Gracie when she celebrated her 21st birthday in May.

21 years ago today, on a rainy morning in Nashville (like today) this beautiful soul was born into our lives….. I thought my heart would burst with love, joy and happiness! She has been a light in the family since the very beginning! She makes us laugh(constantly….she’s a nut!), she has the biggest heart I’ve ever known, attracts friends so effortlessly, she treats everyone with kindness and respect and has more talent than is possible in one person! I know as she makes her mark in this world she will brighten everyone’s life that she meets! We r so proud of her, love her so much! It’s a bittersweet day to see your little girl turn 21…….lots of memories We love you p pi with everything in our hearts

So when Maggie’s 20th birthday rolled around on Sunday (August 12), both Tim and Faith took to Instagram to share some special memories with their middle daughter. Tim chose to share a couple of photos, the first being from a spring break trip they took to Aspen, Colorado earlier this year.

As beautiful as Maggie looks in that photo, she looks downright gorgeous in the second, which is a simple side profile shot.

Tim penned some sweet words about his baby girl to accompany the photos, writing, “Your sisters, your mom and I are all so proud of the young woman you have become; the issues that you stand for and the respect that you have for yourself and the people around you.”

Happy 20th “Mags-a-Million” Your sisters, your mom and I are all so proud of the young woman you have become; the issues that you stand for and the respect that you have for yourself and the people around you. As your father, you and your sisters make me proud everyday Love you Maggie! Hope you have a terrific day

As for Faith, she chose to honor her daughter’s special day by sharing a short video of the two of them enjoying some quality time together.

The video appears to be from the duo’s cross-country road trip they took when Maggie was moving to start her first year of college. On that trip, the two took and shared a number of photos together, as well as a video of them doing carpool karaoke to Taylor Swift’s “Bad Blood.”

That apparently wasn’t the only song they sang along to on their trip. To mark Maggie’s birthday, Faith shared a video of the two of them jamming out to Elton John’s “Tiny Dancer.” They looked like the were having a blast!

Happy birthday to my car pool karaoke partner. 20 years today!!!!!! You are truly one of a kind. I love you so much. Your dad, sisters and I are so proud of you in every way imaginable. Happy Birthday my angel. Mom

There’s no denying that Maggie has grown into a beautiful young woman. You can watch her share another special moment with her mom from their original carpool karaoke video below.