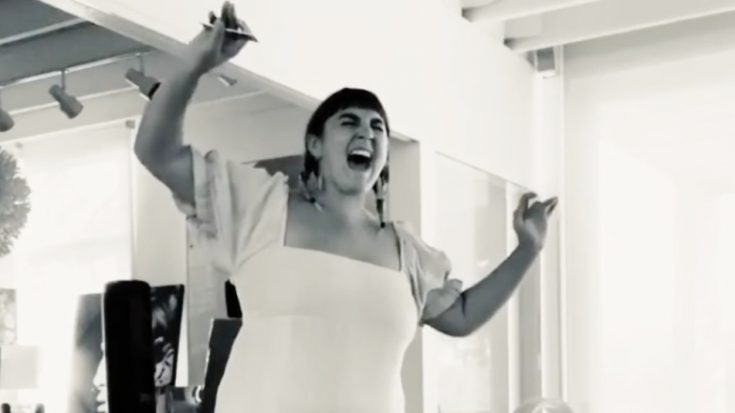 In 2015, Tim McGraw released his album Damn Country Music. On it included a duet with his eldest daughter Gracie titled “Here Tonight.” A few months before he released the album, he had Gracie join him on stage in Nashville to perform the song together.

In 2019, Tim showed off his daughter’s voice once again in an Instagram post that showed them singing the 1981 duet “What Kind of Fool” by Barbra Streisand and Barry Gibbs while riding together in the car.

PIPES!!!!!!……Dang, this girl can sing! Gracie and I having fun with Babs and Barry on our trip #chaseyourdreamsgirl

Gracie once again proved her musical ability when she posted a video of herself on September 27. Wearing a long, red dress, Gracie sang the song “I’m Not That Girl” from the musical Wicked.

It’s clear that Gracie loves to sing, and we love hearing her do it because she is so talented. More recently, Grace was “bored,” so she poured herself a martini, set up her camera and sang a song from her favorite musical, Evita.

Performing “Rainbow High,” Gracie belted the Andrew Lloyd Webber-written song at the top of her lungs and all we can say is, “Dang!” She’s that good! Gracie performs these musical covers in her apartment and we’d honestly love to be her neighbor for some free entertainment.

Watch her full performance below.

Who else is bored. I am so I sing EVITA? this is sooooo not serious I’m just having fun with my fave musical and I probably messed up the lyrics but who cares!!!