‘The Voice’: Team Blake Duo Delivers “Ghost In This House” Cover During Battle Round 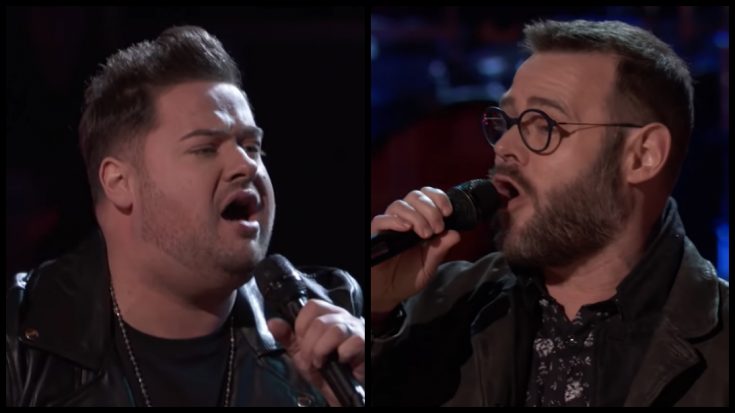 Voice coach Blake Shelton found himself forced to make an “impossible decision” during the final night of season 18 Battle rounds.

During the Voice Battle rounds, coaches put two of their team members in a duet sing-off with the coach having to choose one member to move on, and one to eliminate. Todd Tilghman, who received a four-chair turn during his Blind audition, faced off with Jon Mullins, who only received a one-chair turn from coach Blake during his audition round. Blake chose for the pair to cover Shenandoah‘s 1990 single “Ghost In This House,” a song the country star called “ a classic song that is sacred to hardcore country music fans.”

THE VOICE TONIGHT "Ghost In This House by Shenandoah, This is a classic song that is sacred to hard core country music fans and it's under a microscope  anytime somebody performs something like this." – Blake Shelton Thank you to Team Blake for Performing our song tonight!

While Blake questioned his song choice during rehearsals, the men didn’t let him down when it came to show time. In fact, all of the coaches were impressed and surprised at the emotion both singers brought to the performance.

“I love the emotion both of you are putting into the performance,” coach John Legend said before expressing his surprise at Mullins’ vocals. “Jon, you only got one of us to turn around [during the Blinds], and I’m hearing you today and I’m like. ‘Why didn’t we turn around?’ You sound so good.”

Nick Jonas agreed, saying: “It was a really really well executed performance…Todd, the last time I heard you sing, you lit this place on fire. Jon, you came out of nowhere with this, and really blew us all away. I’m proud of you for that.”

“I made a huge, monumental mistake by pairing you two together,” coach Blake told his proteges. “Jon, that’s really to your credit. You’re the one who stepped up and made this into this impossible decision because it was such an epic performance.”

Shelton ultimately chose to keep Todd Tilghman on his team, but Jon Mullins didn’t go home. Nick Jonas used his only Steal to save him, meaning that both Tilghman and Mullins advance to next week’s Knockout Rounds. During this stage of the competition, teammates will face off again, but this time will perform their own song individually. The coaches will then chose one vocalist to advance, and one to eliminate.

Watch Todd and Jon perform “Ghost In This House” in the video below.