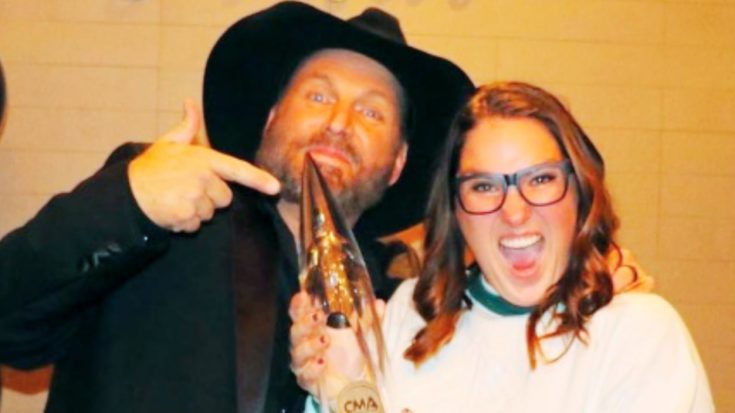 From early on, it became clear that Garth Brooks‘ youngest daughter, Allie, had inherited his love of music. Not only that, but she inherited his talent too.

You may have seen one of the many videos online that show Allie delivering brilliant covers of country classics such as “Don’t Close Your Eyes” and “Three Wooden Crosses.”

Those videos were filmed years ago, and Allie’s voice is even stronger and more beautiful than ever.

Even though Allie always knew that she wanted to pursue a career as a singer, she admits that her father tried to keep her from doing so. During an interview with radio host Bobby Bones, she said that Garth encouraged her to go to college in the hopes she’d discover another passion and forget about going into the music business:

Allie did indeed attend Belmont, and graduated, but she never gave up on her dream of becoming a singer. After she graduated, she posted a celebratory photo on Instagram, writing, “Kept my promise, now it’s all about you.”

Now that she’s out of school, Allie is completely focused on her music career, and just released her original single “Work in Progress.”

Before that, Allie actually performed onstage with her dad, and was a singer in his famous group of backup vocalists known as the Wall of Sound.

But these days, you won’t see Allie singing with her dad anymore, and there’s a reason for that.

“We’re trying to keep it separate,” Allie admitted. It’s also worth noting that she goes by Allie Colleen professionally, rather than Allie Brooks, just to further separate her father’s career from her own.

However, Allie made it clear that she didn’t stop singing with her father because she dislikes doing so. Rather, she just wants to establish her own career without always being attached to him:

“I was super, super lucky to get to do a couple shows with him, as far as being a part of the Wall of Sound, his harmony group, which was silly. The fact that he thought I could find anything between those three perfect singers was silly. But it was so much fun. It was just a blast to get to do, but it really kind of blurred those lines that we’ve worked so hard to keep where they are.”

We can certainly understand why Allie would want to establish her own legacy…and she’s doing a splendid job! Check out her brand-new single “Work in Progress” by tuning in to the clip below.