The Political Message Behind Merle Haggard’s “Okie From Muskogee” 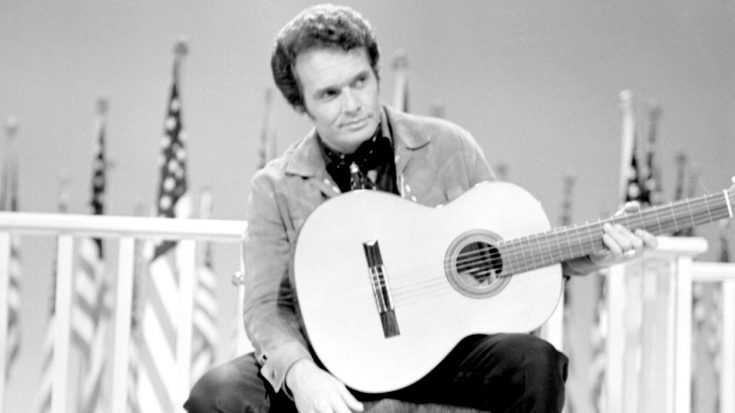 Merle Haggard had plenty of hits over the years, but there are a few that you can consider career-defining songs. One of those hits is “Okie From Muskogee.”

He released it in September 1969 as the first single off his album of the same name. By November, “Okie From Muskogee” had hit number one on the Billboard Hot Country Singles chart. After the song became extremely popular, Haggard recorded a live album and that version of “Okie From Muskogee” became a hit among fans as well.

In the song, Haggard sings of the traditional values of Muskogee, Oklahoma, and how he’s proud to be from a place where people were patriotic, didn’t smoke marijuana, take LSD, wear beads and sandals, burn draft cards, oR challenge authority.

The Origin Of The Song

“Okie From Muskogee” began as a joking exchange between Haggard and his drummer Roy Edward Burris.

The Telegraph reports that while touring the country, Haggard spotted a sign that read, “Muskogee, 19 miles,” and he joked to Burris that they probably didn’t smoke marijuana in the small town. The rest of the band joined in and threw out other activities that probably wouldn’t be happening in Muskogee, and because of the times they were in, talked about the Vietnam War.

The next night, Haggard and his band The Strangers played the song to see how it would be received.

“Soldiers started comin’ after me on the stage and I didn’t know what was going to happen next until they took the mic and said we’d have to do it again before they’d let us go,” he told The Telegraph.

Haggard revealed he had never had that strong of a reaction to one of his songs before. It was then that he became what The Weekly Standard like to call him, the “musical spokesman for the Silent Majority.”

He Did It For The Troops

To protest the Vietnam War, American men would burn their draft cards – something that Haggard sang about in “Okie From Muskogee,” and for good reason.

“When I was in prison, I knew what it was like to have freedom taken away. Freedom is everything,” he told The Boot.

During the Vietnam War, he was witnessing a lot of different kinds of protests while young men were being drafted into a war.

“Here were these [servicemen] going over there and dying for a cause — we don’t even know what it was really all about — and here are these young kids, that were free, b—hing about it,” he said. “There’s something wrong with that. We were in a wonderful time in America, and music was in a wonderful place. America was at its peak, and what the hell did these kids have to complain about?”

He continued, “These soldiers were giving up their freedom and lives to make sure others could stay free. I wrote the song to support those soldiers.”

A Song About Pride And Patriotism

In 1988, Haggard told the Birmingham Post-Herald, “[The song] was just kind of a patriotic song that went to the top of the charts at a time when patriotism wasn’t really that popular.”

“Okie From Muskogee” became a political anthem for Middle America, who felt their voices had been silenced with all the protests going on. Over the years, Haggard had seen people interpret his lyrics and get in debates about them, but no matter your political opinion, he wanted to make sure that everyone knew what the song was really about – pride.

He told Village Voice‘s Nat Hentoff, “My father came from the area, worked hard on his farm, was proud of it and got called white trash once he took to the road as an Okie. Listen to that line: ‘I’m proud to be an Okie from Muskogee.’ Nobody had ever said that before in a song.”

He explained that “the main message in Muskogee was pride, and the patriotism was evident.“

Watch Haggard perform “Okie From Muskogee” at what would be his final public performance before he passed away.