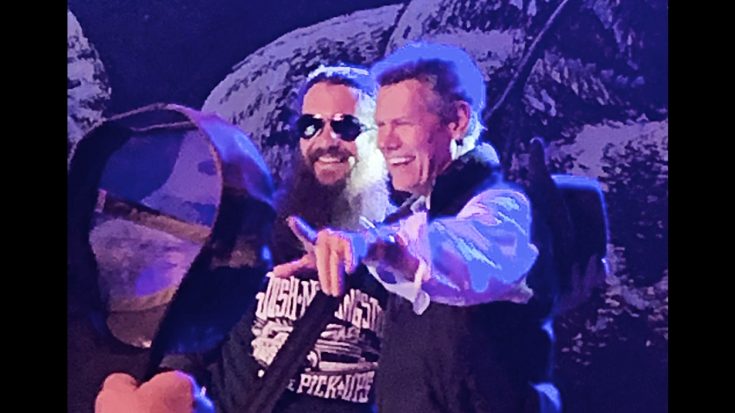 A legendary surprise from a man known throughout the world as one of the best country singers was enough to send the crowd into a frenzy and leave a fellow country singer starstruck.

Lots of shows on the books for the rest of the year! #Dubuque #GrandRapids #Buffalo #Albany #Baltimore #Philadelphia #Stroudsburg #Pittsburgh #Akron #Dallas. Near you? Tix and dates on the website – codyjinks.com

Jinks a widely-known performer who has been recording country music (the stuff he was raised on) for more than 13 years. He started out as a lead singer for thrash metal band Unchecked Aggression and later ended up releasing country albums with his backing band the Tone-Deaf Hippies.

His single “Must Be the Whiskey” sold more than 25,000 copies after its release in 2018 and he’s become one of the foremost names in young outlaw country singers to-date.

After singing Travis’ own mega-hit “Diggin’ Up Bones” on stage for folks at Heritage Hall in Ardmore, Oklahoma, he got the surprise of a lifetime – and so did the crowd!

Jinks has been paying homage to Travis for years and regularly intertwines a song or two from Travis’ legacy, but this January 25th, 2019 performance became extra special.

Travis lives just an hour outside of Ardmore, Oklahoma on his ranch near Tioga, Texas – so popping by for a surprise was an easy feat for he and wife Mary.

Randy Travis came out on stage with his wife and personally thanked Jinks as the crowd began cheering and shouting “Randy! Randy! Randy!”

“[Remember] when George Jones said, ‘Who’s Gonna Fill Their Shoes?’ He said, Randy Travis. And I just want to tell you tonight, when people ask us who is gonna fill Randy Travis’s shoes, [it’s] Cody Jinks,” Mary said to the excited group of country fans.

Very cool @CodyJinksMusic to honor @randytravis tonight with Diggin’ Up Bones & then he comes on stage for the crow to go wild. #RandyTravis #CodyJinks pic.twitter.com/41ZSN5oHEl

“I’m just glad I didn’t screw the song up with him sitting right there,”  Jinks said, adding, “When I was a kid, there were three artists I wanted to sing like: One of ’em was Merle Haggard. One of them was Keith Whitley. The other was Randy Travis!”

Randy Travis’ official playlist on Spotify has featured Jinks a number of times, so there’s no doubt that he listens to the outlaw country jams Jinks has been putting out – and this surprise visit made everything come full circle for both of them.

Check out Randy Travis’ surprise visit to Cody Jinks in the video below!