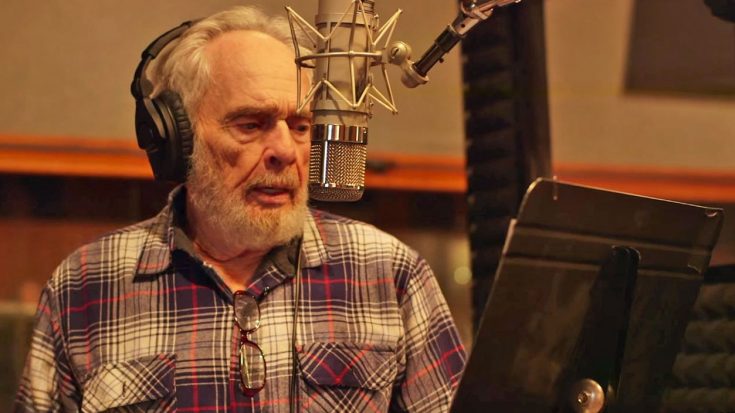 Stricken with pneumonia for months prior to his untimely passing, country legend Merle Haggard had one goal: write and record as much music as he could.

And that’s exactly what he did.

Beyond the seemingly endless collection of recorded works that spanned the entire length of his career, Haggard was working on completing as many songs as possible. That collection, dubbed “The Archive” by Haggard, has not seen a release to date, but those will come in their own time.

Got a jukebox but no swinging doors.

Haggard tragically passed away on April 6, 2016, and in the time since, his family has had to make a decision on what would be his first posthumous single. Instead of releasing something buried in “The Archive,” they chose to release the very last song he recorded, “Kern River Blues.”

The track first debuted on SiriusXM’s Willie’s Roadhouse on May 12th, 2016, and has been available on iTunes and through his own website since.

“Kern River Blues” is a single looking back on his time in Bakersfield, California during the late 70s and has the country legend lamenting the city’s immense growth during that time.

The song ends in a haunting memory for the singer, “Well, I’m leaving town forever / Kiss an old boxcar goodbye / I dug my blues down in the river / But the old Kern River is dry.”

According to his website, this final piece of his legacy of music was recorded at his home on February 9, 2016.

Merle and his wife, Theresa. The song "Valentine," originally written and sung by Merle's good friend, @willienelsonofficial holds important meaning in Theresa's heart. The first time Merle heard the song, he loved it so much he knew immediately he had to record it for her. Download it on @itunes: link in bio.

Listen to the full track in the video below and let us know what you think in the comments!

The world will forever miss this true country legend.