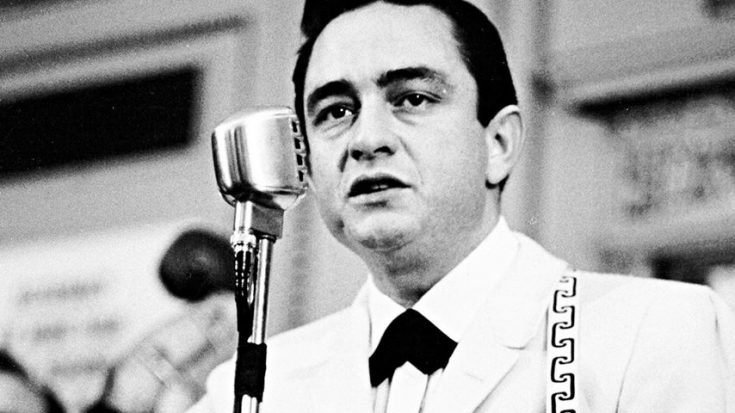 He started his post-military career as a door-to-door appliance salesman and ended it as one of country music’s greatest stars ever. One of country music’s biggest stars, Johnny Cash, began his professional music career in his early 20s, shortly after landing stateside.

The most enduring hit by “The Man in Black” (who sometimes wore white) was “I Walk The Line,” which he both wrote and recorded in 1956.

Written in just twenty minutes, the song went on to sell more than two million copies. In addition to becoming a huge hit on the country western music charts, it also reached the Top 20 on several pop charts. The song was used as the title of a 1970 Gregory Peck movie; and of course, was the title for the 2005 film about Cash’s life.

At age 23, Cash said he penned the song as a reminder to himself to remain faithful to his wife at the time, Vivian Liberto, while he was on tour with Elvis Presley.

Yes, that’s right! Johnny was the opening act for 20-year-old Elvis Presley. Elvis was constantly surrounded by admiring ladies. Temptation was never far behind. That’s what motivated him to write “I Walk the Line.”

Written backstage at a Texas roadshow in 1956, the song remains one of the most famous ode to fidelity. The song’s lyrics refer to staying true to his wife, personal responsibility, and avoiding temptation and criminal behavior.

According to Mental Floss, Cash said he wrote “I Walk the Line” in 20 minutes: “The lyrics came as fast as I could write.”

Beginning Of The End

The hit song kept him in line until he met June Carter, aspiring songstress and member of Mother Maybelle and the Carter Sisters, backstage at the Grand Ole Opry. That was the beginning of the end.

Vivian filed for divorce in 1966; it became final in ’67. Johnny and June, who shared a mutual admiration, married on March 1, 1968, in Franklin, Kentucky. Adding to the four daughters Cash fathered while with his first wife, Johnny and June Carter Cash had one son together. They toured together for a storied 35 years until June’s death in May 2003.

Sit back and listen to the song that changed Johnny Cash’s life, catapulting him to fame. Then, share with us YOUR favorite Johnny Cash song. Or, maybe, you have more than one…