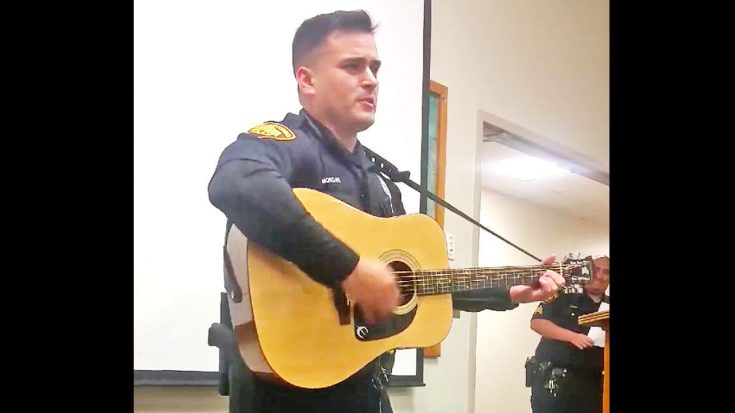 One San Antonio police officer had a big surprise in store as his coworkers all gathered for roll call one day. With a guitar in hand, Officer Billy Morgan stunned everyone in the room when he broke out into Johnny Cash‘s iconic hit, “Folsom Prison Blues.”

“I know it’s a song about going to prison, but it’s one of my favorite Johnny Cash songs,” Morgan said.

People have been impressed by the quality of Morgan’s voice, which sounds a bit like that of “The Man in Black” himself.

When it comes to singing, Morgan is actually quite experienced.

A Lot Of Singing Background

He told KENS 5 News out of San Antonio that he has been singing since he was a teenager. He also worked as a professional singer after leaving the U.S. Air Force.

This San Antonio Police Department officer sounds just like Johnny Cash!Check out the story behind the viral video and how his talent was discovered: http://on.kens5.com/2sR8QXD

Still, Morgan’s roll call performance was unexpected, and so was the response that it received once one of his fellow officers shared it online. In less than a month’s time, the video of his roll call cover managed to generate nearly 400,000 views and was shared over 5,000 times.

Officer Alexander Garza was the one who first shared the video of Morgan’s performance. He was blown away by what he heard from him that day, writing in the video’s caption:

“So, this happened at roll call before we went to go fight crime. If you see this officer on the street, he may just sing you a song. Share away!”

Morgan felt inspired to sing during roll call in order to lighten the mood for him and the other officers. He said that since their job is so serious, it’s nice to be able to have some fun every now and then.

“We’re just regular blue collar folks, just like everyone else,” Morgan said. “We want everyone to know that we joke around. We have fun. We care about people just as much as they do.”

We hope you have fun watching Morgan’s surprise cover of “Folsom Prison Blues” in the clip below. You’re sure to be impressed by his talent.

So this happened at roll call before we went to go fight crime. If you see this Officer on the street, he may just sing you a song ;). Share away!https://youtu.be/lT1V28S3cv4