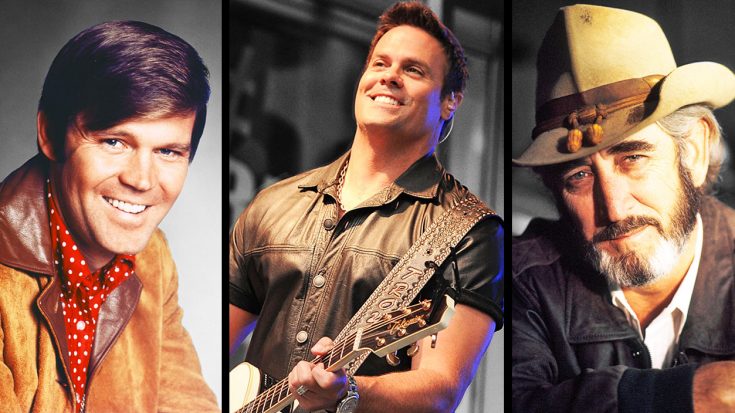 This year has been filled with many impactful moments that have affected so many, and tragically, some of those moments include the loss of singers we have been listening to and adoring for years.

Throughout the year we have paid tribute and honored many of these incredibly talented and beloved singers in a variety of ways, but in this one-of-a-kind article, we are honoring all of them together in a way of showing our dedication to the brightness they’ve brought to our lives through music.

Some of the folks that we’ve lost have been fairly young and some quite old, but each one meant something to all of us and did their part to continue the legacy of country music as a whole – a movement we all can appreciate!

Known throughout the country music community as one of the most iconic and prolific songwriters, Norro Wilson passed away on June 8th, 2017 at 79 years old.

He spent decades as both a songwriter and producer, bringing songs like George Jones’ “The Grand Tour,” and Charlie Rich’s “The Most Beautiful Girl” to the masses. Wilson earned a spot in the Nashville Songwriters Hall of Fame, and worked in almost every possible part of the music business.

Alongside his career as a songwriter and producer, Wilson also had some success on the charts with his own music and notched multiple Top 40 hits.

The founding member and pioneer of Southern rock was a huge musical influence to many and had performed as recently as October 2016 before taking some time off due to a vocal injury.

Sadly, Gregg Allman passed away on May 27th, 2017 at his home in Savannah, Georgia. Throughout his nearly six-decade-long career in music, he held a part in bringing huge hits like “Midnight Rider” to the charts and left a legacy we all can cherish.

Widely considered a pioneer in the growth of country music on television, producer and casting director of the iconic Hee Haw television series, Sam Lovullo, died at age 88 on January 3rd, 2017.

Lovullo produced all 86 episodes of the beloved country music variety show in addition to several segments of Hee Haw Honeys and Nashville Palace. In 1974, the Academy of Country Music presented him with the “Jim Reeves Memorial Award” to acknowledge his immense contribution to the integration of country music into mainstream culture.

Don Williams began his solo career in 1971 and made the first of many chart debuts with his 1973 song “The Shelter of Your Eyes.” His 1970s hits included such chart-toppers as “Tulsa Time,” “She Never Knew Me,” and “It Must Be Love.”

Williams officially retired from performing and touring in March 2016, telling his beloved fanbase that he was taking time to “enjoy some quiet time at home.” That same year, he released his final album, Gentle Giants: The Songs of Don Williams.

On September 8th, 2017, Williams passed away after a battle with emphysema.

Just days after his final performance at the Hollywood Bowl in Los Angeles, this rock and roll legend with deep ties to every part of the music community passed away at his home in Malibu from cardiac arrest.

Tom Petty was known throughout the world as one of the foremost voices in music and had a seemingly endless string of hits with a massive following that was unrivaled by many. His music touched millions and contributed to the growth of many country artists.

The 66-year-old singer/songwriter had just ended his recent tour and was moving toward retirement to spend time with his family at the time of his passing. He died on October 2nd, 2017.

The pair were set to perform at a venue in Medford, New Jersey that was near an airfield. Gentry went for a ride in a helicopter as part of a tour that showed off the area. The helicopter experienced engine failure and crashed just short of the landing strip. Both Gentry and the pilot were killed in the crash.

For more than 60 years, Mel Tillis was renowned as a world-class country legend and had released more than 60 albums – bringing hits like “Coca-Cola Cowboy,” “I Ain’t Never,” “Southern Rains,” “Good Woman Blues,” and more to country fans.

Tillis passed away on November 19th, 2017 after battling a series of illnesses and complications since early 2016 and never fully recovered. He was 85 years old.

An incredibly decorated and recognized singer, songwriter, musician, and actor – Glen Campbell lived a legacy of pure country music and his impressive talent became an everlasting part of his family life, too.

Following a diagnosis of Alzheimer’s in 2011, Campbell and his family toured through November of 2012 on what he called his “Goodbye Tour.” As he continued to battle the disease for the next five years, his wife gave regular updates and his family members actively worked toward supporting Alzheimer’s research and charities.

On August 8th, 2017, Glen Campbell passed away at his care facility after succumbing to his disease.