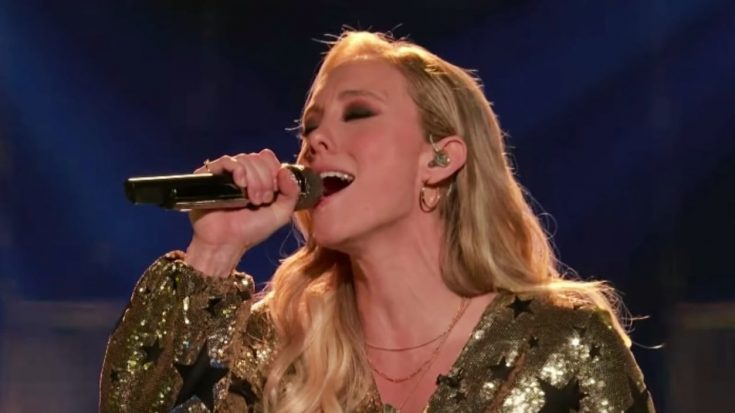 The Voice made another brutal cut in its second week of live shows during Season 17, bringing the Top 13 down to the Top 11.

For those who are unfamiliar with the Instant Save, here’s how it works. The contestants who are in jeopardy of being eliminated each take to the stage and perform a song they have prepared. After their performances, viewers then vote for who they think the winner should be.

The person with the most votes remains on the show, while the others are eliminated.

#TheVoice Instant Save winner is… ? pic.twitter.com/rVS73CViED

Knowing that the pressure was on as she sang for the Instant Save, Wilson pulled out an iconic song by an equally iconic band….”The Chain” by Fleetwood Mac.

Released in 1977, “The Chain” was included on Fleetwood Mac’s legendary album, Rumors. The song reached the 30th spot on the Mainstream Rock chart and went on to become a staple part of the band’s concert setlists.

It goes without saying that Wilson had a lot to live up to with her performance of the song during the Voice Instant Save. But she rose to the challenge, and gave her performance her all as she aimed for a spot in the Voice Top 11.

Viewers seemed to be impressed with the 28-year-old Nashville native’s cover of “The Chain.” Following her performance, numerous fans took to Twitter to vote for her and show their support.

Oh my gosh!!! I can not believe 2 of my favorite are fighting for a save. No matter the results you have got this. You are great!!! Beautiful voice!!! Don't give up [email protected]_Wilson

I voted for you I love your singing keep on ?singing you have a beautiful voice

But in the end, Wilson didn’t earn as many votes as Team Gwen’s Martinez, who won the Instant Save. So both Wilson and Team Kelly’s Boyle were sent home.

You can watch Wilson’s final Voice performance in the video below. She will definitely be missed!