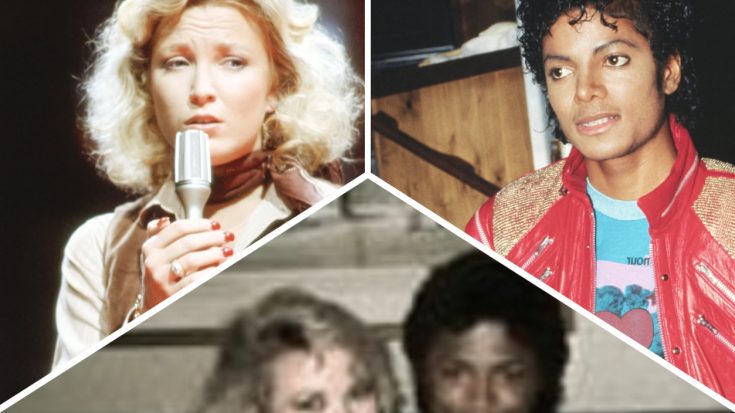 Michael Jackson was honored on his birthday by people around the world. But there was one person we never expected to have had such a close relationship with him.

Tanya Tucker recently posted a very ’80s looking photo of her with Jackson. From her teased feather cut to his Gumby tee – you can’t help but smile seeing these two kids hanging out together.

The image shows them sitting in a booth with ginormous smiles on their faces. Tanya Tucker captions the image saying, “Remembering my beautiful friend and the King of Pop today. Well, maybe remember isn’t the right word because I don’t think we’ll ever forget such a talent. Happy Birthday, Michael. This year’s wish is on me. I hope you’re enjoying your peace.”

Her beautifully stated words have a much deeper meaning than being part of an Instagram hashtag. When Jackson first passed away in 2009, Tucker took it very hard. She told The Boot that “It’s not been a good month. We’ve lost Farah Fawcett, Ed McMahon, Michael Jackson, and David Carradine… Losing one person would be bad enough, but when it’s bam, bam, bam, bam, it just makes me want to break down and bawl.”

She continued to talk about how she connected with Michael because they were both child stars. She noted that there was a huge difference in their upbringing though, and it was heartbreaking. She said, “The difference is I had a great set of parents. I was thinking of Michael in that gold casket, about how none of it means anything now. The only thing that brings me some peace of mind is maybe now he can have peace. He has no more abuse, no more people talking down on him about things he’s not guilty of.”

She recalled Jackson as a friend and couldn’t help but remember some of the good times. She told The Boot about the time they first met at the American Music Awards. She laughed saying, “He had to borrow my bathroom because there wasn’t one in his dressing room. He came to my door and asked and I was like, ‘Sure come on in,’ and my hair was all in curlers!” What a way to start a friendship with the King of Pop!

What would you think if Michael Jackson looked at you over his shades like this?

While the world still mourns the loss of such great musical talent – it is beautiful to know that his memory continues to be immortalized through the people he touched. We truly hope that Tucker’s birthday wish for his peace is coming true.

It is only fitting to remember his influence on the music industry and in the lives of millions of fans with his old friend Tanya’s hit song “Without You.” Be sure to check it out below and drop a line or two in the comments below.