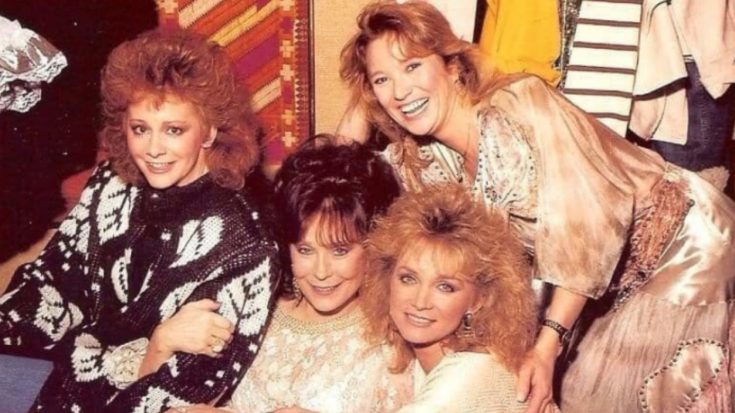 Tanya Tucker is trying to break the internet with this star-studded, country legend throwback photo!

Tanya Tucker has been in the spotlight and adored by fans from a very young age. Making her debut as a country music artist in 1972 at just 13-years-old with her debut song “Delta Dawn,” she has been stealing hearts with her music ever since.

Tucker’s record label attempted to downplay her age at the time of the song’s release, however, word eventually got out and Tucker became an overnight sensation with her powerful, raspy voice.

Her popularity continued to grow as the years went by, and she continued to release new songs. By the time Tucker was old enough to drive, she had multiple number one songs and in the top ten charts.

Tucker has continued her country music career, delighting fans with her spunky attitude and incredible talents.

On her social media accounts, she gives fans an inside look at her life sharing performances, fun with friends, and throwback photos of herself.

In July 2018, she shared a throwback photo of herself standing in the dugout during a Kenny Rogers celebrity softball game. Donning a Farrah Fawcett hairstyle, showing some serious side-eye and holding a beer in her left hand, she looks like she means serious business.

On May 28, 2020, Tucker added another throwback photo that was cute as ever! It shows her at ten or eleven years old as a Lew King Rangers Kid in the 1940s musical talent show. She explained she spent 18 weeks singing kid’s songs, and she asked her dad if she could quit the show. Tucker wanted to sing “fighting, drinking, and cheatin’ songs” like her hero Loretta Lynn.

I was 10 or 11 here when I was on the Lew King Ranger Kids morning show in Phoenix. I did 18 straight weeks singing kids songs. And I couldn’t take it any longer. I wanted to get to singing fighting, drinking, cheatin songs and @lorettalynnofficial my hero. So Dad told Lew we’re moving on. Grateful for Lew and these special memories. #Throwbackthursday #tbt

On Thursday, July 23, 2020, Tanya posted a photo on Instagram featuring four of the most iconic women of country music in history!

In the photo, Reba McEntire, Barbara Mandrell, and Tanya Tucker are all surrounding the Queen of Country herself, Loretta Lynn!

All of the women have their hair teased to the high heavens, except for Tanya, who admitted in the comments she was the only one apparently not ready for the stage.

“Well obviously everybody else was make up stage ready but ME!!! Must’ve been on Tuckertime!!
But really What a grand photo of 3 of my faves and me! But really it’s 3 of us girls @[email protected] & me surrounding the Queen. Miss @lorettalynnofficial! This made me smile!!”

Definitely made us smile too, Tanya!

Check out the iconic photo below!

Well obviously everybody else was make up stage ready but ME!!! Must’ve been on Tuckertime!! But really What a grand photo of 3 of my faves and me! But really it’s 3 of us girls @reba @barbaramandrellmusic & me surrounding the Queen. Miss @lorettalynnofficial! This made me smile!! ✨? #throwbackthursday