Loretta Lynn Mourns Death Of Regis Philbin: “We Will All Miss Him” 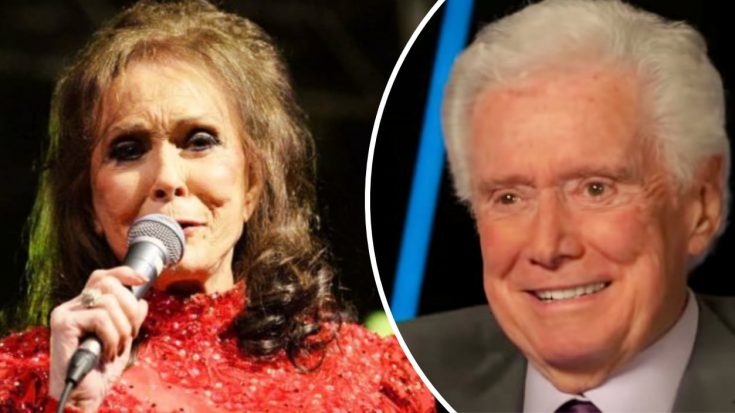 On July 24, beloved TV personality and game show host Regis Philbin passed away at the age of 88. His family announced his passing through a statement issued to PEOPLE.

“We are deeply saddened to share that our beloved Regis Philbin passed away last night [July 24] of natural causes, one month shy of his 89th birthday. His family and friends are forever grateful for the time we got to spend with him – for his warmth, his legendary sense of humor, and his singular ability to make every day into something worth talking about. We thank his fans and admirers for their incredible support over his 60-year career and ask for privacy as we mourn his loss.”

Regis Philbin, longtime television host who held the Guinness World Record for most hours on camera on US television, has died at age 88, his family says. https://t.co/CKp0GjZein

Celebrities joined the millions of people who mourned Philbin’s passing. Among those who posted tributes to him on social media were his former Live! co-hosts, Kathie Lee Gifford and Kelly Ripa.

Lynn, who turned 88 earlier this year, recognized Philbin with a short tribute on social media. “I was so sad to hear of Regis’ death,” Lynn started her post.

She went on to talk about how Philbin was always a source of light, writing, “It seemed he belonged to all of us. He made us all smile and kept us all laughing.”

In conclusion, Lynn shared her condolences with Philbin’s family. “We will all miss him,” she wrote. “My heart and prayers are with his family.”

You can read Lynn’s full tribute to Philbin in the post below.

I was so sad to hear of Regis' death. It seemed he belonged to all of us. He made us all smile and kept us all laughing. He worked hard, never gave up, and lived his dream. We will all miss him. My heart and prayers are with his family. #regis #hugthoseyoulove

After a 60-year career, Philbin holds the Guinness World Record for the most hours on U.S. television. He was a welcome and beloved presence in the homes of so many people over the course of those 60 years.

As Lynn made clear in her tribute, Philbin will be so dearly missed by us all. May he rest in peace.