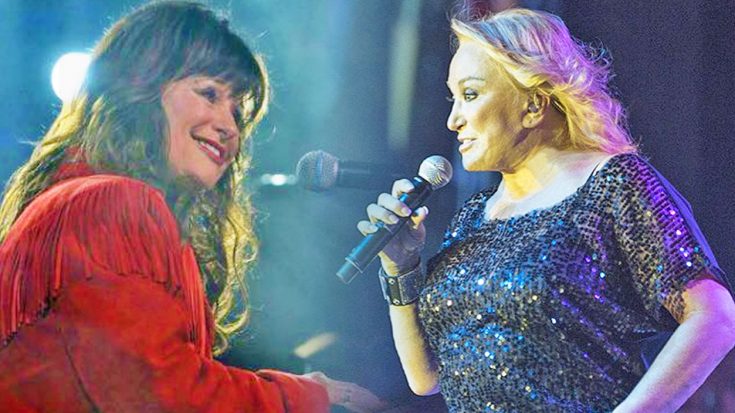 Fans attending Tanya Tucker’s Gilbert, Arizona show in December 2017 were in for a treat! Not only were they able to watch Tucker sing some of her most well-known hits including “Delta Dawn” and “Strong Enough To Bend,” but they also saw a special duet between friends that one can only describe as legendary.

Country singer Jessi Colter appeared on stage to sing with Tucker, who described the experience as a “pleasure.” The “Delta Dawn” singer posted a video of their duet to Facebook and fans are already chiming in, saying how sad they were to have not been in attendance.

Right after the music began, Tucker and Colter were whispering and giggling. “This one’s the best entertainer in the business,” Colter said with a smile before singing the opening lyrics to “Storms Never Last.”

Colter originally recorded the song with her husband, outlaw legend Waylon Jennings, in 1981 for their duet album Leather and Lace.

#CountryMusic Today in 1981:
"Leather And Lace," a collaborative album by Waylon Jennings and Jessi Colter, is certified gold… pic.twitter.com/YDsrpkZeNK

Jennings previously released it as a solo on his 1980 Music Man record, but the duet version has since become iconic to country music fans.

“What a pleasure it was to have the wonderful Jessi Colter come on stage and sing “Storms Never last” with me in Gilbert, Arizona last week,” Tucker captioned the video on Facebook.

It’s so incredible to watch these two women sing together, trading off verses, so we can only imagine what it was like to actually be there. Watch their surprise duet below!

Jessi Colter sings with me!

What a pleasure it was to have the wonderful Jessi Colter come on stage and sing "Storms Never Last" with me in Gilbert, Arizona last week!