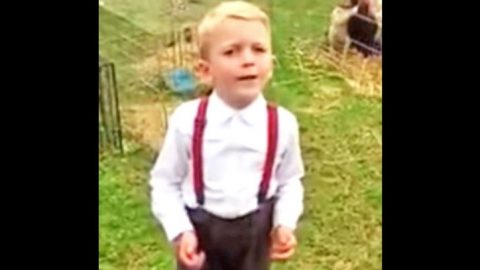 Kenny Rogers‘ “The Gambler” is as timeless as a country song could be. It is considered Rogers’ signature piece, earning him the nickname as “The Gambler.” Even those who know little about Rogers and his music know that he’s the one who sang the Grammy-winning tune.

Due to its popularity, “The Gambler” has been covered more times than we could count. Country artists such as Johnny Cash and Blake Shelton have recorded their own versions of the tune. Even Alvin and the Chipmunks tried their paws at singing “The Gambler!”

But as great as all of those covers were, we’ve got one here that takes the cake. This cover is performed by an adorable young cowboy who has a good taste in music and fashion. Wearing a pair of bright red suspenders and cowboy boots, the little lad breaks out into singing “The Gambler” without missing a beat.

We’re not sure how old this boy was when this video was filmed, but we’d have to guess he was no older than five. Because of that, he sang “The Gambler” like only a young kid would. He jumbled up a lot of the words, but still sang them with confidence even if he didn’t know what they were. That’s what made his little performance fun to watch!

The boy’s dapper outfit added to the cuteness of his performance. He was so sharply dressed, and seemed proud of it too! Toward the end of the video, he can be seen holding on to his suspenders after he proudly blurts out the last few lines of the chorus.

All of the bystanders gave the boy a well-deserved round of applause once he finished singing. Even the chickens in the background seemed to cheer for him in approval!

If you need something to brighten up your day, this video should do the trick. This little fella will manage to capture your heart with his enthusiastic singing and love of country music!