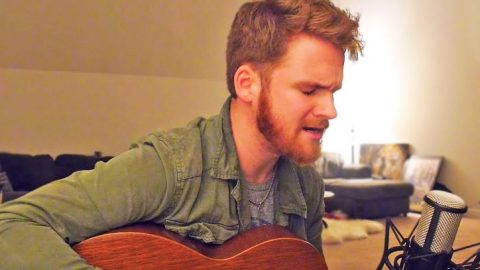 When Merle Haggard passed away in April 2016, he left a huge legacy behind. That legacy lives on in the voices of his talented sons, Marty, Noel, and Ben, who are all singers as well. All three have performed in their father’s honor at various concerts and events, and have earned a great deal of respect for doing so.

Before Merle died, Ben was touring with him as his lead guitarist in his band The Strangers. Ben had been playing guitar for Merle ever since he was 15 years old, and proved to fans that he was more than worthy of sharing the stage with his legendary father.

But Ben had a hidden talent that he didn’t display on stage…he’s also an insanely talented singer. Over the years, Ben slowly started to share short videos of himself singing some of his father’s songs. After Merle’s death, Ben started sharing more cover videos in tribute to his father.

Once the world heard Ben’s voice, it didn’t take long for them to be hooked. Many have praised Ben’s voice, saying the it contains the rich, emotional quality that comes straight out of his father’s era. After receiving so much praise, it seems Ben is well on his way to leaving his mark on country music.

With the one year anniversary of his father’s death approaching, Ben decided it was time to cover a song that was extremely close to his heart. That song was the gospel tune “Where No One Stands Alone,” which Merle included on his album Songs for the Mama That Tried.

Songs for the Mama That Tried was comprised entirely of gospel songs and hymns. Merle dedicated the album to his mother, who also appeared on the cover with him. Although the album wasn’t a big seller, Merle poured his heart and soul into each and every song, including “Where No One Stands Alone.”

The same can be said for Ben’s cover of the song. You can tell that he doesn’t just sing the words…he feels them. Those real-life emotions come through clear as day in his voice, resulting in a passionate performance.

Ben seems lost in his own world as he sings, as if the music transports him to a completely different place than the living room in his home. We’re sure his father was on his mind the entire time.

Tune in below to watch Ben’s breathtaking performance of “Where No One Stands Alone.” Merle would be so proud of him.