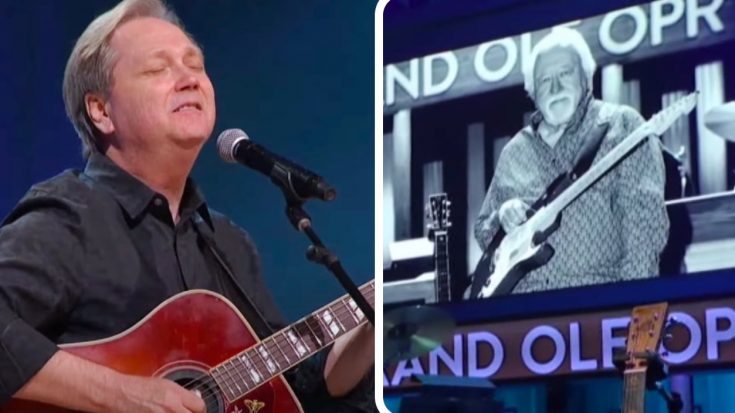 Capps was one of Nashville’s most renowned and sought-after musicians. He played guitar in the Grand Ole Opry’s house band for over 60 years and played on hundreds of studio recordings.

Just a few of the many iconic songs that feature Capps’ musicianship include:

“As I look back at my sixty years on the Opry, I can truthfully say, If you love what you do, time just flies.” – Jimmy Capps In memory of our dear friend, Jimmy Capps. Thank you for more than 60 years of music on the Opry stage.

Considering how much Capps meant to country music and to the Opry in particular, Steve Wariner chose to pay tribute to him when he played on the Opry stage on Saturday (June 6).

During the current world environment, the Opry has been hosting its Saturday night shows without an in-house audience. But country fans around the world can still see and hear the show on radio, TV, and online.

The other artists who joined Wariner for the June 6 show were Carly Pearce, Michael Ray, and Lee Brice. When it came time to close the show with a tribute to Capps, Warnier took the charge.

Wariner opted to perform one of his own songs, the tearjerking “Holes in the Floor of Heaven.”

“Holes in the Floor of Heaven” was released in 1998 and peaked at the second spot on the country chart in the U.S. and Canada. The song went on to win the Song of the Year Award from both the CMA and the ACM.

It was a fitting song to perform in tribute to Capps. Pictures of him flashed on the screen above the Opry stage as Wariner sang. After he finished, he continued playing his guitar without saying a word…and he didn’t need to. His gentle guitar playing conveyed his message fine on its own: “We miss you Jimmy Capps, and we love you.”

Tune in to the clip below to watch Wariner sing “Holes in the Floor of Heaven” in honor of Capps. He starts singing around the 53:29 mark.

You may want to keep some tissues close by, because this is an emotional tribute.