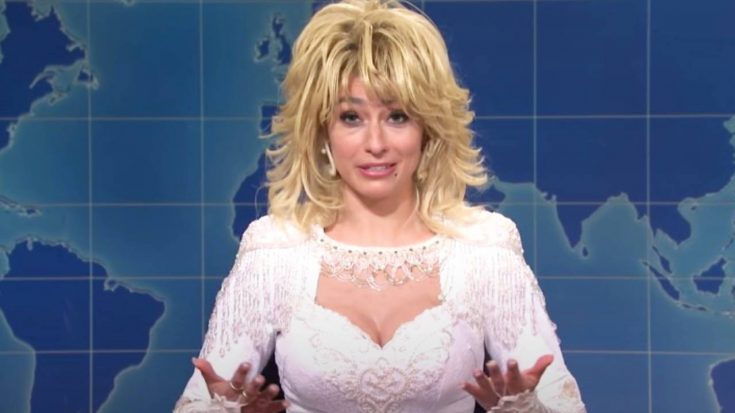 The world was first introduced to comedian Melissa Villaseñor when she auditioned for the sixth season of America’s Got Talent in 2011. In her audition, she did impressions of Barbara Walters, Natalie Portman, Miley Cyrus, Kathy Griffin, and a singing impression of Christina Aguilera.

She made it all the way to the semi-finals and eventually to Saturday Night Live, where she became a cast member in 2016. Villaseñor is able to use her skills as an impressionist on the sketch comedy shows in many different ways. On the Dec. 12th episode, she was featured in the Weekend Update segment where she was supposed to be talking about Christmas songs.

After being introduced, she appeared in full Dolly Parton garb, wig and all. When Weekend Update anchor Colin Jost asked if she was dressed as Parton, Villaseñor said, “This is my special holiday outfit!”

Jost didn’t believe her because she’s apparently been trying to get her Dolly Parton impression on the show in some way!

“Nope, I’m 100% here to just sing some Christmas songs,” she reassured him.

Then, she performed “Jingle Bells” to the tune of “Jolene.” Finally, Villaseñor admitted that she was, in fact, doing her Dolly Parton impression.

She said, “Okay, news flash! I want to be Dolly. Who doesn’t?! She’s the coolest. She’s a great singer, she writes her own songs, she donated a million dollars to the vaccine, plus, there was a news story this week that she saved a kid from getting hit by a car!”

Then she said she’d close out the segment with a Christmas hymn that she sang every year with her family at midnight mass, which she said was in Latin. Then, the music for “9 to 5” began playing, which had us laughing right away!

Millions of people online watched the clip, even Dolly Parton herself! Her response? “I was flattered and I never looked and sounded so good!”

I was flattered and I never looked and sounded so good! https://t.co/UcrGp4H0Qt

Watch the full skit below.