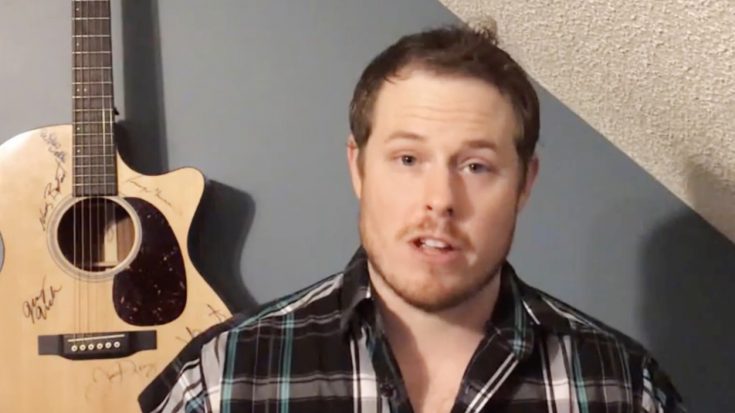 One of the greatest country music love songs has to be Keith Whitley‘s “Don’t Close Your Eyes.” Many have tried covering the tune but one fella didn’t have the proper equipment to record himself singing it, so he had to get a little bit creative…

In 1988, Whitley released “Don’t Close Your Eyes” on an album named after the song itself. He must have known it was a great song – but he had no idea it would top the charts at number one!

Since its release, many have recorded or performed the song as a way to honor the late legend. Even his son, Jesse Keith Whitley, has performed it to pay respect to his father.

For most artists trying to make it in Nashville, they don’t always have the technology they need to get where they’re going. That is where a little creativity and a whole lot of grit comes into play.

Alex Hilton of The Alex Hilton Band moved to Nashville from Front Royal, VA to follow his dream of becoming a country music star. To do so, he has started posting covers twice a week to honor the artists that have come before him while making his own name in the industry.

Creating your own videos is a whole lot of work – and when you don’t have a studio readily accessible, you have to come up with solutions to some big problems. So when he needed equipment to record, the country boy stepped up to the plate and put it all together himself.

His duck-tapped system seemed to work good enough for him! He’s used it for a few videos on his channel and even calls himself out for it!

Hilton decided to add a few, quick facts for his viewers in the video description. He tells us:

It is nice to see that he really cares about the history of the songs he covers AND that he knows how to laugh at himself.

As a result of all his hard work and faith, Hilton gave a performance of Whitley’s hit song like no other. You can check it out in the video below and be sure to tell us what you think in the comments!