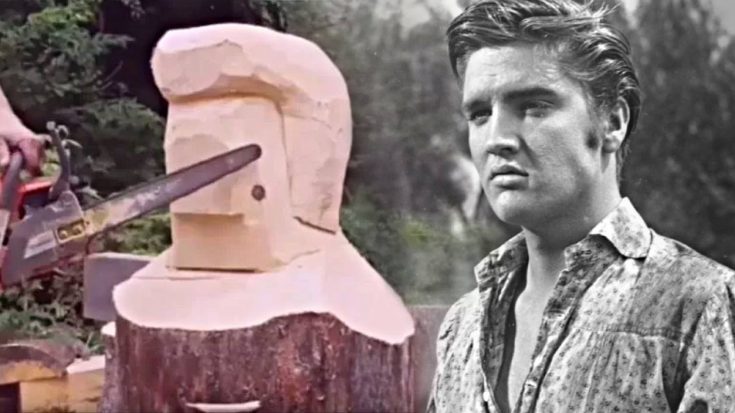 When we think of Elvis Presley, we think of a lot of different things. Graceland, The King of Rock N’ Roll, the gold lamé suit, peanut butter, and banana sandwiches…but never a wooden log. Well, this guy might just have changed all that…

Christopher LaMontagne of Sterling, CT is an amazing woodworker and artist. He’s perfected the art of taking chunks of lumber and creating masterpieces.

But on the 40th anniversary of Elvis’ death – he decided to do something that would quickly gain him and his practice popularity around the world: create a giant Elvis entirely out of wood!

He explained, “I have always been a fan of Elvis and I thought this project and thought it would be a great tribute to him on the 40th anniversary of his death.”

But it wasn’t going to be easy. Something like this takes incredible patience and skillful hands.

First, LaMontagne had to take away the excess wood with his chainsaw – making it easier to fine-tune the details on Elvis’ face.

Next, he had to cut out and detail the piece – making sure each part of Elvis was perfectly carved. Especially that hair we all know and love!

Finally, LaMontagne went in and hand-painted each part of Elvis. His eyes were piercingly blue and his hair perfectly coiffed.

Is It For Sale?

After making the piece, LaMontagne’s video went viral and one question started flooding in: is it for sale?

LaMontagne wanted to make a nice tribute to The King and wasn’t necessarily expecting to sell the piece but he said, “I did not make [the carving] specifically for anyone, but it will sell.”

You can check out all the craftsman’s work and even have your own sketch or design created by him by emailing him at [email protected] To see the whole process in play, watch the video of him creating Elvis below!