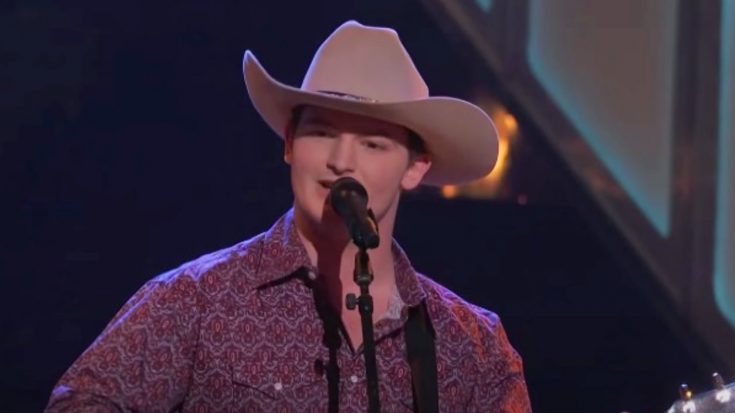 After Jordan Matthew Young and Ethan Lively delivered their knockout performances on The Voice, they left their coach Blake Shelton wishing he had taken the day off. Why? Because he didn’t want to choose between the two talented artists.

Young performed first, and covered “She Talks to Angels” by American rock band The Black Crowes. It’s a song his coach is more than familiar with.

Shelton is known for delivering one of the most recognizable covers of “She Talks to Angels.” One video of Shelton’s performance has over nine million views on YouTube.

“She Talks to Angels” has also been a favorite song of past Voice contestants. It was covered by Ricky Duran during Season 17 and by Dennis Drummond during Season 13.

As for Lively, he remained true to his country roots by singing Travis Tritt‘s 1990 single, “Help Me Hold On.” The song was a #1 hit on the Billboard Hot Country Songs chart following its release.

“Help Me Hold On” was famously covered by previous Voice contestant Dave Fenley during the Season 15 blind auditions. So needless to say, both Lively and Young had a lot to live up to!

The two singers rose to the occasion, and each delivered performances that impressed the coaches, especially Shelton. He knew he faced a hard choice, and he didn’t want to make it.

First, Shelton spoke to Lively, saying, “…Your voice is so crazy, it’s so cool.” He went on to tell him how he believes no one else in country music sounds quite like him, other than perhaps Trace Adkins or Josh Turner.

“There’s just not anybody out there…there’s not one right now that takes up your lane,” he said.

Shelton then focused his attention on Young and his “She Talks to Angels” cover. Mentioning how Young has a “freakin’ cool” voice, Shelton went on to compliment his naturally rough and gritty tone.

“…that thing that I’m so jealous of, which is that raspy, gravelly thing that you had,” Shelton said.

After a little bit of deliberation, Shelton made the tough decision to eliminate Lively. Young was named the winner of the knockout, and gets to continue into the live shows.

Even though Lively was available for steal, none of the other coaches claimed him for their teams. But although his time on The Voice has come to an end, we have faith he has a bright future ahead of him in country music!

Tune in to the video below to watch Young and Lively’s knockout performance. Let us know if you agree with who Shelton chose as the winner!