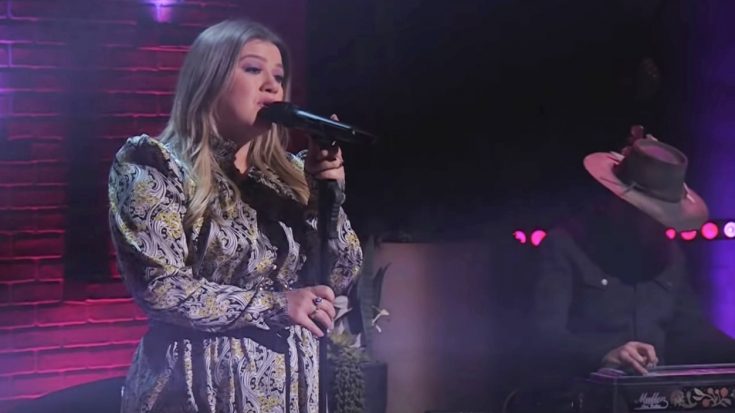 The more Kelly Clarkson sings country music, the more we think she should record a full country album – and fans agree!

“Man, I want a Kelly country album,” one fan wrote on a recent Kellyoke video. “Or just a kellyoke album.”

For the past two years, Kelly Clarkson has kicked off every episode of her talk show covering a song that has been requested by a member of her audience. Her past country music covers have included Martina McBride’s “Independence Day,”

Carrie Underwood’s “Before He Cheats,”

and even had Garth Brooks help her out with his song “Ain’t Goin’ Down ‘Til The Sun Comes Up.”

For her Monday, April 18th show, Clarkson performed a song originally by The King of Country Music himself, and fellow Texan, George Strait. Singing “You Look So Good In Love,” Clarkson sang the heart-wrenching song about watching an ex fall in love.

Fans commented on the video, expressing how much they enjoyed it.

“Always loved this song. Wonderful job Miss Clarkson,” one fan wrote, while another said, “Stunning rendition of a classic. I love when she sings country.”

We’re sure George Strait himself would approve of this rendition! What do you think? Watch it below.