Simon Stops Girl Singing Martina McBride’s “Anyway” – He Asks For 2nd Song, Doesn’t Like It Either 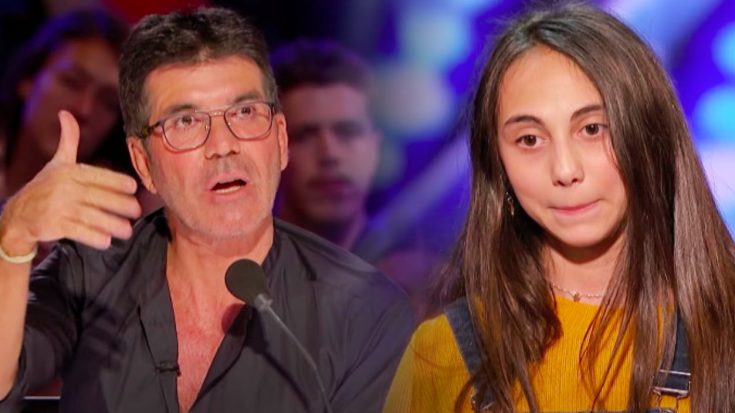 During the 14th season of America’s Got Talent, judge Simon Cowell stopped 12-year-old Ansley Burns in the middle of her audition and let her know he thought her backing track was “horrible.”

He then asked her to sing a cappella, which she did, and that pleased him.

As Ansley’s audition showed, Simon doesn’t hold anything back if he isn’t a fan of an AGT hopeful’s performance. Even if the person auditioning is just a child.

Still, it came as a shock during the Season 15 auditions when Simon interrupted 12-year-old singer Ashley Marina during her audition. She covered country singer Martina McBride‘s 2006 single “Anyway,” and seemed to impress the crowd and some of the judges.

However, Simon wasn’t a fan. Just like he did with Ansley on the prior season, he told Ashley he didn’t like her backing track. He then went one step further, telling her he thought the song was “not right” for her.

He asked Ashley to sing a second tune, and this time instructed her to perform it a cappella so he could get a better feel for her voice. Ashley took the whole thing in stride, and started to sing Sia’s “Opportunity.”

But Simon didn’t like that performance either. He stopped Ashley mid-song, and shared some critiques while the crowd booed him.

“Ashley you want my honest opinion?” Simon asked. “I think you brought the wrong songs with you today. It’s very difficult for me…to actually judge you on that.”

Even though Simon made it clear he wanted to vote “no” on Ashley, judge Sofia Vergara convinced him to give the girl another chance. He conceded, and told Ashley to come back later with a third song, suggesting she should sing something that was originally by a male artist.

But Ashley couldn’t find a song she was comfortable with, so she took a risk. She decided to sing one of her original tunes when she finally returned to face the AGT judges again.

Ashley wrote the song herself, which is about her father and how he has always been her biggest supporter. The crowd loved it, Sofia loved it, Howie Mandel loved it, and most importantly, Simon loved it.

“Wow Ashley,” Simon said in the immediate aftermath of her performance. After he and the other judges offered their comments, he happily voted “yes” to send her through to the next phase of the competition.

Tune in to the video below to see Ashley’s dramatic audition and how she finally managed to earn Simon’s praise. Her determination to please him paid off in the end!