Shooter Jennings Honors Father With 2012 Cover Of His ‘Favorite’ Song, ‘Belle Of The Ball’ 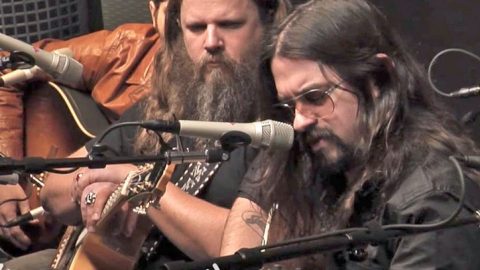 Carrying On The Jennings Legacy

The legacy that Waylon Jennings left behind continues to live on in the songs that he wrote and recorded. It also lives on through his youngest son, Shooter, who is making sure that country music never forgets about his father.

Shooter is a singer himself, and he follows in his father’s “outlaw” footsteps. In addition to performing Waylon’s songs, Shooter has also crafted his own music.

He has released a total of ten studio albums, and earned a Top 50 hit with his single “4th of July,” which featured country legend George Jones.

As Waylon’s son, Shooter is naturally called on whenever a tribute to his father is set to take place. He joined his mother Jessi Colter, Jamey Johnson, and his dad’s good friend Hank Williams Jr. in 2012 for a special session with SiriusXM’s outlaw country station.

Shooter wanted to play one particular song during the tribute…a track off of his dad’s 1977 album Ol’ Waylon titled “Belle of the Ball.” The song was never released as a single, and certainly didn’t get as much attention as Ol’ Waylon‘s chart-topping hit “Luckenbach, Texas.”

Waylon Truly Cared About This Song

But the song’s importance rests in what Waylon thought about it. As Shooter explained, Waylon “always expressed…that was the favorite song he ever wrote.”

The song’s opening line probably meant the most to Waylon. It goes, “A vagabond dreamer, a rhymer and singer of songs.” Shooter said that they may have been the only words his father ever wrote that served as a direct representation of who he was.

Because of that, the opening line to “Belle of the Ball” was engraved on Waylon’s tombstone.

Shooter transitioned into singing the song after he finished explaining the meaning behind it. Jamey played guitar along with him while Hank sat by his side, appearing moved by Shooter’s performance.

It’s no wonder why Hank was so touched by the moment. Shooter filled his voice with sincere emotion, and you can tell just how much each and every word meant to him. That powerful connection allowed him to put forth a worthy cover of the song his dad had deemed his “favorite.”

Prepare to be mesmerized by Shooter’s graceful tribute with “Belle of the Ball.” We have no doubt that his father would be proud of him for this one.