Shania Twain’s Horse Stars In Her ‘ACM Presents: Our Country’ Performance From Her Barn 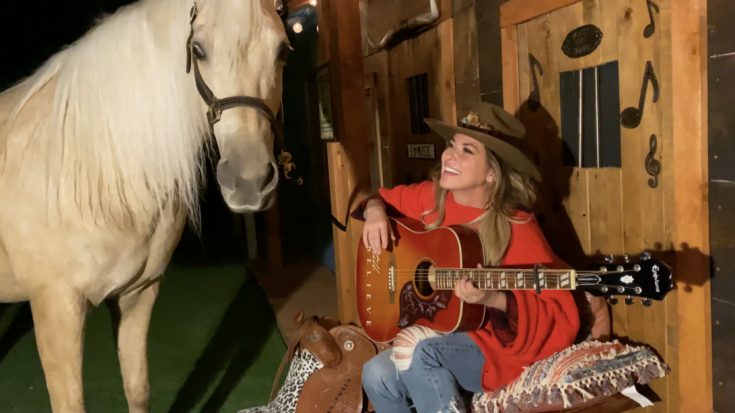 Shania Twain was one of many country stars who took part in the ACM Presents: Our Country television special that aired Sunday night (April 5).  Twain tuned in from her barn, joined by a couple of her pets. The collaboration made for quite a memorable event.

Twain, clad in a red sweater, ripped blue jeans and a cowboy hat, sat on a bench offered a word of hope to her fans, saying:
“These are crazy times, but we’re going to do what we always do and pull together to get through it. From our homes to your homes, with stories, songs and all of us,” Twain said. “Because, let’s face it. We’re all in this together.”

She then strummed her guitar and sang two of her biggest hits: “Honey, I’m Home” and “Man! I Feel Like a Woman.” Her dog laid at her feet, seemingly unimpressed. But, it was her horse that stole the show as it continually leaned in toward Twain’s guitar, even licking the strings at one point.

Fans of Shania expressed their love for the performance (and her horse) on social media.

Shania Twain sang with a Horse tonight on the @ACMawards. @ShaniaTwain and that horse are just so majestical. Like we don’t deserve this and she served it. Like what a great time to be alive honestly!! That was everything ❤️❤️❤️

@ShaniaTwain your paly stole the show. What a sweetheart. pic.twitter.com/rGE2TII7Tx

@ShaniaTwain Awesome!!!!! Absolutely loved how you broke those songs down and ya sounded great! Thanks! @ACMawards #ACMOurCountry #CrazyTimes ❤️

We think you’ll agree that Shania Twain’s performance was one of the best of the night. Check it out below!